Far Rockaway is located in Queens Community District 14 and its ZIP Code is 11691. It is patrolled by the New York City Police Department's 101st Precinct. 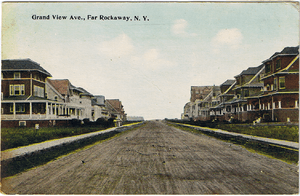 Grand View Avenue in the 1910s

The name "Rockaway" may have meant "place of sands" in the Munsee language of the Native American Lenape. Other spellings include Requarkie, Rechouwakie, Rechaweygh, Rechquaakie and Reckowacky.

In September 1609, Henry Hudson and his crew were the first Europeans to see the Rockaways and Jamaica Bay. Hudson was attempting to go to the Northwest Passage. On September 11, Hudson sailed into the Upper New York Bay, and the following day began a journey up the modern-day Hudson River.

Rockaway was, back then, inhabited by Canarsie Indians. The name Reckowacky, which is also spelled Requarkie, Rechouwakie, Rechaweygh, or Rechquaakie, was to distinguish the Rockaway village from other Mohawk Nation villages; "Reckowacky" means "lonely place", or "place of waters bright". By 1639, the Mohegan tribe sold most of the Rockaways to the Dutch West India Company. In 1664, the English got the land from the Dutch. In 1685, the tribal chieftain, Chief Tackapoucha, and the English governor agreed to sell the Rockaways to one Captain Palmer for 31 pounds sterling.

The Rockaway Peninsula was originally part of the Town of Hempstead, then a part of Queens County. Palmer and the town of Hempstead disputed over who owned Rockaway, so the land was sold to Richard Cornell, an iron master from Flushing in 1687. Cornell and his family lived on a homestead on Central Avenue, near the Atlantic Ocean shore; upon his death, Cornell was buried in a small family cemetery, Cornell Cemetery, which is the only designated New York City landmark in the Rockaways. The Rockaway Association wanted to build a hotel on the Rockaway peninsula. The association, consisting of many wealthy members, bought most of Cornell's old homestead property. The Marine Hotel, which was built on that site, became a place where the Vanderbilt family, Henry Wadsworth Longfellow, and Washington Irving, eventually stayed. The Rockaway Association also built the Rockaway Turnpike. The Marine Hotel burned to the ground in 1864, but more hotels and private residences were built in the area.

Horse-drawn carriages and horses originally comprised a transport mode to the Rockaways. A ferry traveled from Lower Manhattan to Brooklyn. By the 1880s, the Long Island Rail Road's Rockaway Beach Branch was built from Far Rockaway station. The steam railroad went to Long Island City and Flatbush Terminal (now Atlantic Terminal), which facilitated population growth on the Rockaway Peninsula when it opened in the 1880s. Benjamin Mott gave the LIRR 7 acres (2.8 ha) of land for a railroad depot. Land values increased and businesses in the area grew, and by 1888, Far Rockaway was a relatively large village. It incorporated as a village on September 19 of that year.

By 1898, the area was incorporated into the Greater City of New York. Far Rockaway, Hammels, and Arverne tried to secede from the city several times. In 1915 and 1917, a bill approving the secession passed in the legislature but was vetoed by the mayor at the time, John Purroy Mitchel. 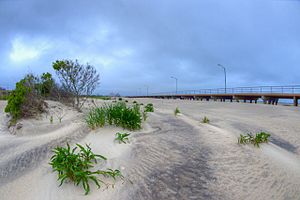 The nearby beach made Far Rockaway an attractive destination for tourists and vacationers from the other boroughs. Bungalows were the homes of choice for many residents of the community who lived in Far Rockaway. The popularity of the resort suffered after the railroad abandoned the Rockaway Beach Branch in 1950, and by the increase in automobile ownership, followed by air travel, which opened up distant destinations to large numbers . As the neighborhood's heyday as a resort community declined in the 1950s, substantial numbers of public housing developments were built. Much of the housing was converted into year-round housing for low-income residents, and some bungalows used as public housing. The 1970s New York City budget crisis had a negative impact on social services. which negatively affected the Far Rockaway.

The Beachside Bungalow Preservation Association was created in September 1984, to "improve the quality of the Far Rockaway community through preservation, education, and cultural programs." "

A collection of materials highlighingt the history, correspondence, and activities of the organization was donated to the Queens Library Archives in 2008. 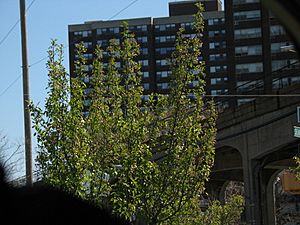 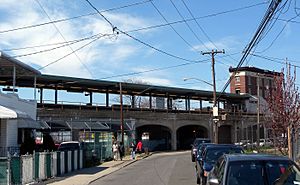 Far Rockaway is served by the following transportation services: 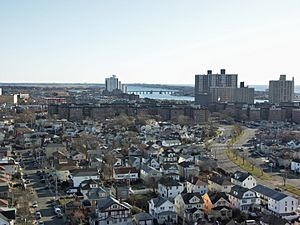 Far Rockaway is a diverse neighborhood with many immigrants from Jamaica, Guyana, and Guatemala, as well as Russia and Ukraine. It also is home to a significant number of Orthodox Jews.

The neighborhood, like all of New York City, is served by the New York City Department of Education. Far Rockaway residents are zoned to several different elementary schools:

All New York City residents who wish to attend a public high school must apply to high schools. Far Rockaway High School was located in Far Rockaway, but was shut down in 2011 as a stand-alone institution. During the administration of Mayor Michael Bloomberg in 2011, many large, underperforming, older traditional high schools were closed in the city. The 1929 building was renovated to operate as the Far Rockaway Educational Campus, home to a number of smaller, specialized academies that share the building. They can provide more individualized attention to their students. The former Beach Channel High School was similarly closed in 2014 and repurposed to house several smaller, specialized academies; it is in Rockaway Park, near Far Rockaway, and draws some of its students from Far Rockaway.

Queens Public Library operates the Far Rockaway branch at a temporary location at 1003 Beach 20th Street. The library was formerly located at Central Avenue. In 2013, New York magazine reported that the city planned to construct a public library in the neighborhood, to be designed by the internationally known architectural firm Snøhetta. Construction started in November 2018.

During the early and mid-20th century, many Jewish immigrants and their working-class descendants settled in Far Rockaway, sometimes first as summer visitors. They founded numerous synagogues and private schools, including those devoted to all-boys or all-girls institutions for educating Orthodox children. Following World War II, as residential housing was developed in Nassau and later Suffolk counties, many Jewish families left the Rockaways for newer housing. According to The New York Times, Far Rockaway had "flourished in the 1940s but withered...1960s" until "a few Jewish families...started the Hebrew Free Loan Society for new home buyers."

Synagogues include Congregation Kneseth Israel in Far Rockaway (The White Shul), which was founded in 1922. Schools include Sh'or Yoshuv Institute of Jewish Studies/Sh'or Yoshuv Yeshiva, Yeshiva Darchei Torah and the Yeshiva of Far Rockaway.

Other synagogues (past and present):

Other schools (past and present):

All content from Kiddle encyclopedia articles (including the article images and facts) can be freely used under Attribution-ShareAlike license, unless stated otherwise. Cite this article:
Far Rockaway, Queens Facts for Kids. Kiddle Encyclopedia.