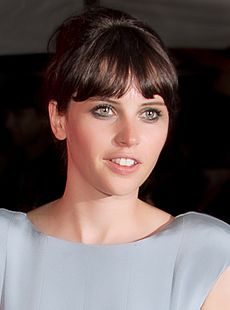 Felicity Rose Hadley Jones (born 17 October 1983) is a British television, stage and movie actress. She starred in movies including Brideshead Revisited (2008), Cemetery Junction (2009) and Rogue One (2016). Jones was born in Birmingham. Sources differ on her year of birth, with some saying 1983 and others saying 1984.

All content from Kiddle encyclopedia articles (including the article images and facts) can be freely used under Attribution-ShareAlike license, unless stated otherwise. Cite this article:
Felicity Jones Facts for Kids. Kiddle Encyclopedia.