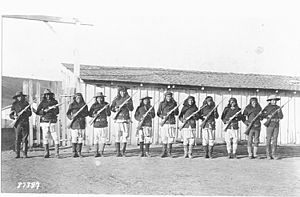 Fort Wingate was a military installation near Gallup, New Mexico. There were two other locations in New Mexico called Fort Wingate: Seboyeta, New Mexico (1849–1862) and San Rafael, New Mexico (1862–1868). The most recent Fort Wingate (1868–1993) was established at the former site of Fort Lyon, on Navajo territory, initially to control and "protect" the large Navajo tribe to its north. The Fort at San Rafael was the staging point for the Navajo deportation known as the Long Walk of the Navajo. From 1870 onward the garrison near Gallup was concerned with Apaches to the south, and through 1890 hundreds of Navajo Scouts were enlisted at the fort.

Fort Wingate supplied 100 tons of Composition B high explosives to the Manhattan Project for use in the first Trinity test and became an ammunition depot "Fort Wingate Depot Activity" from World War II until it was closed by the 1993 Base Realignment and Closure Commission. Environmental cleanup of UXO, perchlorate, and lead as well as land transfer continue to the present day.

There are two Bureau of Indian Education (BIE) boarding schools in the area: Wingate Elementary School, and Wingate High School.

As of 1956[update] the Wingate Elementary dormitory is a former military barracks that also houses students at Wingate High. In 1968 the girls' dormitory had 125 girls; the Associated Press stated that the dormitory lacked decoration and personal effects and was reflective of a campaign to de-personalize Native American students. At the time the school strongly discouraged students from speaking Navajo and wanted them to only speak English. Circa 1977 it opened a 125-student $90,000 building which used a solar heating system.

All content from Kiddle encyclopedia articles (including the article images and facts) can be freely used under Attribution-ShareAlike license, unless stated otherwise. Cite this article:
Fort Wingate Facts for Kids. Kiddle Encyclopedia.