Fort Wingate is near Gallup, New Mexico. There were two locations in New Mexico that had this name. The first one was located near San Rafael. The new location called Ft. Wingate was established on the southern edge of the Navajo territory in 1868. The initial purpose of the fort was to control the large Navajo tribe to its north. It was involved with the Navajo's Long Walk. From 1870 onward the garrison was concerned with Apaches to the south and hundreds of Navajo Scouts were enlisted at the fort through 1890. 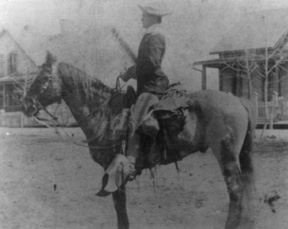 Second Lieutenant Cornelius C. Smith, a Medal of Honor recipient, poses with his favorite horse, Blue, in front of his quarters in 1895.

All content from Kiddle encyclopedia articles (including the article images and facts) can be freely used under Attribution-ShareAlike license, unless stated otherwise. Cite this article:
Fort Wingate Facts for Kids. Kiddle Encyclopedia.