Kids Encyclopedia Facts
"Garden County" redirects here. For the county in Ireland that is referred to as the Garden County, see County Wicklow.

Garden County is a county in the U.S. state of Nebraska. As of the 2010 United States Census, the population was 2,057. Its county seat is Oshkosh.

Garden County was formed in 1909 by popular vote. Voters in the general election of November 2, 1909 approved making the northern part of Deuel County into its own county. It is said the county was so named in the hope that this land should become the garden of the West or with allusion to the "Garden of Eden".

The county has lost population since the Great Depression and Dust Bowl of the 1930s. The land was homesteaded for family farms that often turned out to be too small for subsistence farming under the arid conditions of the region. In the early decades of settlement by immigrants and migrants from the East, farmers did not know how to work the land on the prairies. Tons of topsoil were lost after droughts. 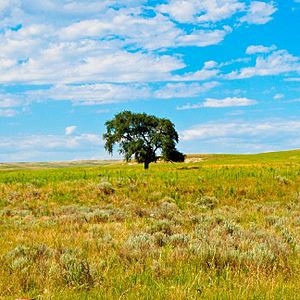 Lone tree on the prairie, on Rt 92 near Lisco

All content from Kiddle encyclopedia articles (including the article images and facts) can be freely used under Attribution-ShareAlike license, unless stated otherwise. Cite this article:
Garden County, Nebraska Facts for Kids. Kiddle Encyclopedia.