Location in Shelby County and the state of Tennessee

The City of Memphis is located on the eastern bank of the Mississippi River in the southwest corner of the U.S. state of Tennessee. It is the regional hub for a tri-state area of Arkansas, Mississippi and Tennessee.

Shelby County is located over four natural aquifers, one of which is recognized as the "Memphis sand aquifer" or simply as the "Memphis aquifer." This particular water source is stated to contain more than 100 trillion gallons (380 km³) of water.

Memphis has a humid subtropical climate, with four distinct seasons. The summer months are persistently hot and humid due to moisture encroaching from the Gulf of Mexico. 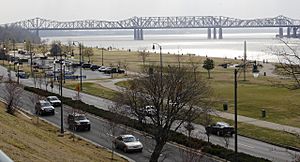 Three bridges over the Mississippi, view from Tom Lee Park (2007)

The city of Memphis It is the regional hub for a tri-state area of Arkansas, Mississippi and Tennessee. The city center is located on the Mississippi river at the site of the earliest settlements.

Interstate 40 enters the city from the northeast, and loops above the central part of the city, exiting across the Mississippi River and traveling to the west. Interstate 55 approaches the city from the south and connects with Interstate 240 which, along with I-40, creates the Inner Beltway. Interstate 269 is Memphis' Outer Beltway, traveling from Millington to Hernando via Arlington, Collierville, Piperton, and Byhalia. Upon completion, Interstate 69 will enter Memphis from Southaven along I-55. It will continue north on I-240 and then onto I-40, where it will branch off at SR-300 to continue north towards Dyersburg. Interstate 22 will eventually travel along US-78 from Birmingham to just outside Memphis and is expected to be named sometime in 2015.

Memphis has expanded its city limits several times within the past half-century due to annexation. The current boundaries (as of December 2012) are roughly as follows:

An area within those boundaries that has not been annexed by the city of Memphis is a neighborhood known as the Bridgewater area, roughly bounded by I-40 to the north, Germantown Parkway to the east, Shelby Farms to the south and Whitten Road to the west. Memphis did try to annex this area in the mid-2000s but held it off due to an inability to move services into the area.

Per Tennessee law, each county is required to set up urban growth boundaries for it cities. Because of this, Memphis (along with each suburb) has what is known as an annexation reserve that defines the eventual city limits. This annexation reserve includes an area between the Big Creek Drainage Canal up to the southern border of Millington, Tennessee and western border of Bartlett, an area between Lakeland, Arlington, Fayette County, and Collierville, Tennessee, and then a small portion of land south of the Southwind area mentioned above.

The core of Memphis is marked by five major districts, with smaller districts lying within their borders. These are Downtown, Midtown, North Memphis, South Memphis, and East Memphis. In recent decades the city has expanded further by annexing adjacent territories, so these names can be somewhat misleading to those who are unfamiliar to the area.

Shelby County is located over four natural aquifers, one of which is recognized as the "Memphis sand aquifer" or simply as the "Memphis aquifer". This particular water source, located some 350 to 1100 ft (100 – 330 m) underground, is stated to contain more than 100 trillion gallons (380 km³) of water by Memphis Light, Gas, and Water, which draws, verifies the cleanliness of, and distributes the water to over 250,000 customers.

Furthermore, in the time since the tapping of the well in 1887, the aquifer has only descended 125 ft (38 m), suggesting a reliable water source in Memphis for years to come.

Most Memphians recognize this as their primary water source, and take great regional pride in their possession of the aquifer. Memphis water is notably soft, low in mineral content, and free of toxic substances.

Spring often begins in late February or early March, following the onset of a sharp warmup. This season is also known as "severe weather season" due to the higher frequency of tornadoes, hail, and thunderstorms producing winds greater than 58 miles per hour (93 km/h). Average rainfall is slightly higher during each of the spring months exceeds 5 in (127 mm), making it the wettest season, but relative humidity is at its lowest. The average last freeze of spring falls on March 19, while the first 90 °F (32 °C)+ high can be expected on May 23.

Early Autumn sees a slight reduction in relative humidity levels, but daytime temperatures remain warm into late October. Abrupt but short-lived cold snaps are common. Late Autumn is rainier and colder, with December on average recording the most rain of any month. Fall foliage becomes especially vibrant after the first frost, typically November, and lasts until early December. The average last 90 °F (32 °C)+ high of the warm season falls on September 22, while the average first freeze of autumn falls on November 14, yielding a growing season of 240 days.

All content from Kiddle encyclopedia articles (including the article images and facts) can be freely used under Attribution-ShareAlike license, unless stated otherwise. Cite this article:
Geography of Memphis, Tennessee Facts for Kids. Kiddle Encyclopedia.