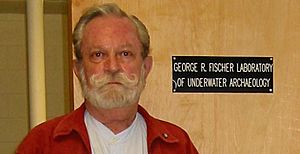 George Robert Fischer (May 4, 1937 – May 29, 2016) was an American underwater archaeologist, considered the founding father of the field in the National Park Service. A native Californian, he did undergraduate and graduate work at Stanford University, and began his career with the National Park Service in 1959, which included assignments in six parks, the Washington, D.C. Office, and the Southeast Archaeological Center from which he retired in 1988. He began teaching courses in underwater archaeology at Florida State University in 1974 and co-instructed inter-disciplinary courses in scientific diving techniques. After retirement from the NPS his FSU activities were expanded and his assistance helped shape the university's program in underwater archaeology.

Fischer was a true pioneer in the field of underwater archaeology and his students are now professors in the U.S. and abroad, serve as state, federal, and territorial archaeologists, direct non-profit research organizations, and work in the private sector. He founded and oversaw the underwater archaeology program for the National Park Service in 1968, and was involved with many of the early shipwreck excavations that are now required reading in introductory textbooks (such as the 1554 Padre Island galleons, 1733 galleon San Jose, 1622 galleon Rosario, 1748 British warship HMS Fowey, 1865 steamboat Bertrand ). Fischer taught, as a volunteer at no cost to the university, for almost 30 years at Florida State University, which enabled their underwater archaeology program and introduced hundreds of students to this field.

Fischer was born in Susanville, Lassen County, to George August Fischer, a forester with the United States Forest Service, and Ruth Robertson Fischer, a school teacher. He was raised in various small towns in northern California, including Alturus, Quincy and Tulelake. While in Tulelake, his mother taught school children at the Tule Lake War Relocation Center, and found it more convenient to bring young George along and teach him with the interned Japanese children. Fischer soon distinguished himself as the only Caucasian child that was hurling stones at the guards during recess.

He met his wife, Nancy (Jane) George Fischer while attending Stanford and they were married on June 20, 1961. Nancy gave birth to their only child, George Matthew Fischer, on May 9, 1963, while Fischer was stationed at Montezuma Castle National Monument in Arizona. George and Nancy lived in Tallahassee, Florida, during his career with the Southeast Archeological Center and Florida State University, and after his retirement.

Fischer attended Stanford University, performing his Undergraduate work from 1955 to 1960 and earning his Bachelor of Arts in Anthropology, with minor concentrations in English and Geology. He continued with graduate school at Stanford from 1960–62 and has completed all requirements for his Master of Arts in Anthropology except thesis. Fischer dabbled part-time as a special student at Florida State University from 1972 to 1973 while employed at the Southeast Archaeological Center.

1972 saw Fischer transferring to Tallahassee to take a position as a Research Archaeologist at the Southeast Archaeological Center, and that institution's close association with the Florida State University Department of Anthropology led to Fischer's work with archaeology faculty and students there. Upon his retirement from the NPS in 1988, Fischer became a Courtesy Assistant Professor for the Department of Anthropology. During his tenure at Florida State, he served as an instructor of underwater archaeology courses, lectured on topics relating to underwater archaeology for courses in historical archaeology, public archaeology, and Southeast colonial history, and assisted or co-instructed courses in scientific diving techniques and project management through the Academic Diving Program. Fischer's instruction and mentoring capacities lessened in the late 1990s as he shifted more into retirement mode.

From July to September, 1969, Fischer served as field coordinator on the excavation of the 19th century steamboat Bertrand at Desoto National Wildlife Refuge on the Missouri River near Blair, Nebraska. Over 200,000 items were excavated from the wreck, whole objects in incredible condition, still packed in the original crates, with the names of the manufacturers, shippers and consignees; all dated to the morning of April 1, 1865. This opened his eyes to the "time capsule" nature of historic shipwreck sites, allowing one to see a specific day and an event caught in time, rather than working with fragments of artifacts and historical trash.

Fort Jefferson is a US Third System Fort 70 miles west of Key West in the Gulf of Mexico, and is the largest brick masonry fortification in the western hemisphere. In the late 1960s and early 1970s Fischer led evaluations of underwater archaeological resources, limited underwater archaeological survey and excavations, and extensive underwater archaeological survey and testing activities. The 1969 work marked the first extensive shipwreck survey by the NPS on park property, noting more than 20 sites. He also participated with staff of Earth Satellite Corporation in a remote sensing survey for historic shipwreck sites, and assisted in analysis of data. Work was conducted at Fort Jefferson in 1981 and 1982 in partnership with Florida State University.

In the summer of 1981 and 1982 Fischer directed underwater archaeological investigations of what is considered the wreck of the Nuestra Señora del Rosario of the 1622 Spanish fleet, as well as an unidentified patache of the same fleet. This investigation revealed what could represent one of the pataches that was sent to salvage the Rosario less than a month after the hurricane that sank it, possibly documenting the speed with which the Spanish salvaged their own wrecks.

HMS Fowey was a fifth rate British warship, carrying 44 guns and over 200 men, captained by a descendant of Sir Francis Drake's brother. It had scored victories over French and Spanish ships in battle, but was lost on a reef at what is now known as the Legare Anchorage in Biscayne National Park in 1748. The sunken vessel became the subject of an ownership dispute with a part-time treasure salvor who presumed that it was part of the Spanish treasure fleet. Through legal conflicts and systematic surveys and archaeological investigations of the 1980s and 1990s, Fischer and his staff from the Park Service and students from Florida State University not only identified the sunken vessel but won a legal battle that effectively changed how Admiralty law was applied to submerged shipwreck sites. The court found that the National Historic Preservation Act of 1966 was to be applied to submerged shipwreck sites as it is to historic sites on land, no longer allowing plundering by individuals using marine salvage and Admiralty law to profiteer from the non-archaeological salvage of a historic shipwreck in National Park grounds. This activity is seen by many of his colleagues and former students as George Fischer's defining act.

Fischer was also a founding member of the Advisory Council on Underwater Archaeology, an international committee of the Society for Historical Archaeology that provides advice and assistance to governments, institutions, and individuals on matters relating to the field. He currently holds emeritus status.

During the period of Fischer's tenure as a courtesy professor the FSU Coastal and Marine Laboratory's Academic Diving Program, established in 1975, grew to one of the largest and most active diving research, support, and training programs in the United States. The Marine Lab and Academic Diving Program traditionally supports the research diving needs of faculty and students from many departments, as well as several outside agencies, including the Florida Geological Survey and the US Environmental Protection Agency. Fischer assisted or co-instructed courses in scientific diving techniques and project management through the Florida State University Academic Diving Program from 1976 through his retirement from the Park Service in 1988, and continued as a co-instructor until 2002. His input and continuity over three decades was instrumental in the expansion and ongoing development of this program.

All content from Kiddle encyclopedia articles (including the article images and facts) can be freely used under Attribution-ShareAlike license, unless stated otherwise. Cite this article:
George R. Fischer Facts for Kids. Kiddle Encyclopedia.