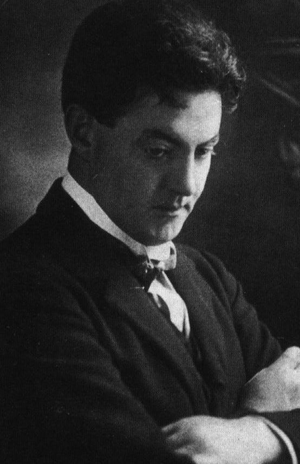 Sir Hamilton Harty (born Hillsborough, Co. Down, Ireland, 4 December 1879; died Brighton, 19 February 1941) was an Irish composer, conductor and accompanist. He is particularly remembered for his work in Manchester with the orchestra called The Hallé.

Harty was born in Northern Ireland, the fourth of ten children. His father was a church organist. He learned to play the viola, piano, and organ. When he was twelve he was organist at Magheracoll Church, County Antrim. He also had organist jobs at Belfast and Dublin. In 1900 he went to London where he was soon known as a composer and an excellent piano accompanist. In 1904 he married the singer Agnes Nicholls. For her he wrote a piece for soprano and orchestra called Ode to a Nightingale.

He soon became known as a conductor, conducting the London Symphony Orchestra and, from 1920, The Hallé, which he made into one of the best orchestras in England. He conducted works by many composers, some of whom were little known at the time: they included Bax, Sibelius, Berlioz, Moeran, Walton and Richard Strauss. He gave the first performance in England of Mahler’s Ninth Symphony.

Harty was knighted in 1925. He resigned from The Hallé in 1933 after there had been a lot of arguments. After that he mainly conducted in London, as well as in United States and Australia.

Harty composed many pieces during his early years, including An Irish Symphony, a tone poem With the Wild Geese, a Violin Concerto, and Ode to a Nightingale.

Harty was ill for the last five years of his life. He had a brain tumour. He was looked after by his secretary Olive Baguley, because he had separated from his wife. He died in Hove near Brighton.

All content from Kiddle encyclopedia articles (including the article images and facts) can be freely used under Attribution-ShareAlike license, unless stated otherwise. Cite this article:
Hamilton Harty Facts for Kids. Kiddle Encyclopedia.