Haskell County (county code HS) is a county located in the U.S. state of Kansas. As of the 2010 census, the county population was 4,256. Its county seat and most populous city is Sublette.

Haskell County was founded in 1887. It was named for Dudley C. Haskell, a former member of Congress.

John M. Barry, Distinguished Visiting Scholar, the Center for Bioenvironmental Research of Tulane and Xavier Universities, New Orleans, Louisiana, concluded that Haskell County was the location of the first outbreak of the Spanish flu of 1918, which killed between 21 and 100 million people. Dr. Loring Miner, a Haskell County doctor, warned the editors of Public Health Reports of the U.S. Public Health Service about the new and more deadly variant of the virus. It produced the common influenza symptoms with a new intensity: "violent headache and body aches, high fever, non-productive cough. . . . This was violent, rapid in its progress through the body, and sometimes lethal. This influenza killed. Soon dozens of patients—the strongest, the healthiest, the most robust people in the county—were being struck down as suddenly as if they had been shot." Barry writes that "In the first six months of 1918, Miner's warning of 'influenza of a severe type' was the only reference in that journal to influenza anywhere in the world.

The railroad and the development of oil and gas fields in the 1930s, and the locating of many deep wells for irrigation significantly improved the economy of the area helping overcome the "dust bowl" of that period. Haskell County was one of the hardest hit counties in the Midwest during the drought of 1930-1937.

The first rodeo and fair was held in Sublette in 1916 and the fair continues at the same location. The first school district was founded in Santa Fe in 1887. Amanda I. Watkins, who owned a considerable amount of land in the county, was named "World Wheat Queen" in 1926. 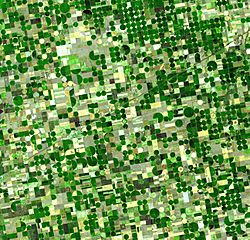 Haskell County is the flattest county in Kansas. 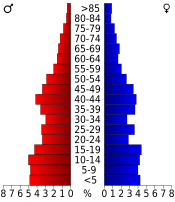 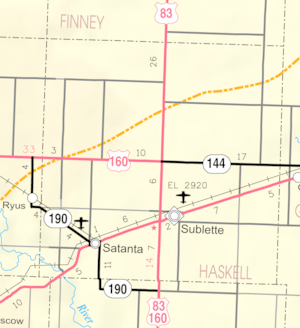 Haskell County is divided into three townships. None of the cities within the county are considered governmentally independent, and all figures for the townships include those of the cities. In the following table, the population center is the largest city (or cities) included in that township's population total, if it is of a significant size.

All content from Kiddle encyclopedia articles (including the article images and facts) can be freely used under Attribution-ShareAlike license, unless stated otherwise. Cite this article:
Haskell County, Kansas Facts for Kids. Kiddle Encyclopedia.