Hillsboro is a city in Traill County, North Dakota, United States. It is the county seat of Traill County. The population was 1,603 at the 2010 census. Hillsboro was founded in 1881.

Hillsboro sits in the fertile Red River Valley. Local agriculture has dominated the area's economy from the beginning. With its location on Interstate 29, halfway between the two metropolitan centers of Greater Grand Forks and Fargo-Moorhead, Hillsboro has seen steady population growth in recent years and has become somewhat of a bedroom community.

The area along the Goose River that is now Hillsboro was first settled by German and Norwegian settlers around 1870. In 1880, the present day site of Hillsboro was founded under the name "Comstock". Local folklore tells of the residents of nearby Caledonia, North Dakota turning away a shabby surveyor because of his appearance. This man was then offered hospitality by residents in the tiny settlement of Comstock. The man turned out to be railroad baron James J. Hill.

Hill was so impressed by the kindness showed to him by the residents of this small community that he decided to place his Great Northern Railway there instead of in Caledonia. The name of Comstock was changed to "Hill City" in September 1880 in honor of Mr. Hill. The city was then renamed "Hillsboro" in 1881 after it was discovered that there was already a "Hill City" in South Dakota.

The routing of the railroad through Hillsboro gave the young city the motivation to attempt to have the county seat moved there from Caledonia, which had been the seat of Traill County since its organization in 1875. The ensuing contest grew bitter and heated, with Caledonians arming themselves, posting guards in the town, and organizing a committee for defense. Hillsboro residents took to calling the defense committee Tigers of the Jungle and Irreconcilables.

Caledonia went as far as to bring in a professional campaign speaker, Col. W. C. Plummer, to campaign on behalf of the town. His speeches were well attended but, despite these efforts, Caledonia lost the county seat to Hillsboro in a 1,291 to 218 vote.

Hillsboro sits on the banks of the Goose River in eastern North Dakota. Located in the center of the fertile Red River Valley, the area around Hillsboro is prime agricultural land and very flat.

This climatic region is typified by large seasonal temperature differences, with warm to hot (and often humid) summers and cold (sometimes severely cold) winters. According to the Köppen Climate Classification system, Hillsboro has a humid continental climate, abbreviated "Dfb" on climate maps.

There were 687 households of which 31.0% had children under the age of 18 living with them, 49.5% were married couples living together, 7.7% had a female householder with no husband present, 3.6% had a male householder with no wife present, and 39.2% were non-families. 35.7% of all households were made up of individuals and 17% had someone living alone who was 65 years of age or older. The average household size was 2.28 and the average family size was 2.98.

There were 679 households out of which 30.6% had children under the age of 18 living with them, 49.5% were married couples living together, 6.6% had a female householder with no husband present, and 38.9% were non-families. 36.7% of all households were made up of individuals and 20.6% had someone living alone who was 65 years of age or older. The average household size was 2.23 and the average family size was 2.92. 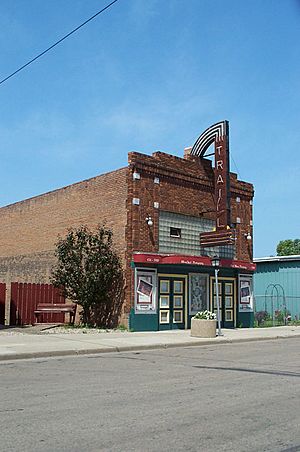 The historic Traill Theatre in Hillsboro

The city of Hillsboro operates a large park on the north side of town. Woodland City Park sits on the banks of the Goose River. It offers a public swimming pool and scenic views of a dam on the river. For many years, there has also been a group of deer living in a penned in area of the park. The Goose River Golf Club sits directly north of town.

The local paper is the weekly Hillsboro Banner. The Banner has been published continuously since 1879, making it the oldest weekly newspaper in the state of North Dakota. Hillsboro has no radio stations of its own. Nearby stations include KMAV 105.5 FM and KMSR 1520 AM in nearby Mayville and KRJB 106.3 FM in Ada, Minnesota. Residents have access to radio stations and network affiliates from both Grand Forks and Fargo.

The BNSF Railway, eventual successor to the Great Northern, continues to maintain tracks in Hillsboro that see a variety of freight trains every day as well as Amtrak's Empire Builder, which passes through without stopping in the early morning hours.

The Hillsboro Municipal Airport is a small airport south of town with a landing strip which provides an area for crop dusters or small private airplanes to stop. However, residents have to travel either to Grand Forks or Fargo in order to take regularly scheduled flights to major airports.

All content from Kiddle encyclopedia articles (including the article images and facts) can be freely used under Attribution-ShareAlike license, unless stated otherwise. Cite this article:
Hillsboro, North Dakota Facts for Kids. Kiddle Encyclopedia.