Traill County is a county in the U.S. state of North Dakota. As of the 2020 United States Census listed the population at 7,997. Its county seat is Hillsboro, and its largest city is Mayville.

Traill County was created in 1875 by the 1874-75 territorial legislature. It was named after Walter John Strickland Traill, an employee of the Hudson's Bay Company and son of Canadian pioneer Catharine Parr Traill.

County headquarters were originally located in a small single-story building in Caledonia. Several replacement courthouses were built during the late 19th century and several votes to move the county seat to Mayville narrowly failed. Efforts to move the county seat to Hillsboro were more successful, and all county records were moved there in 1890. The current Traill County Courthouse started construction in 1905 and is listed in the National Register of Historic Places.

The following public-use airports are location in Traill County: 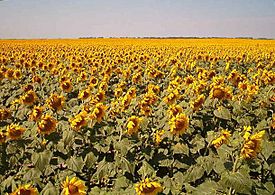 All content from Kiddle encyclopedia articles (including the article images and facts) can be freely used under Attribution-ShareAlike license, unless stated otherwise. Cite this article:
Traill County, North Dakota Facts for Kids. Kiddle Encyclopedia.