During the Apache Wars General Nelson A. Miles used Fort Huachuca as his headquarters until the surrender of Geronimo in 1886. In 1913, the fort became the base for the 10th Cavalry Regiment also known as the "Buffalo Soldiers", which was composed of African Americans. General John Pershing used the fort as a forward logistics and supply base from 1916 to 1917 in his expedition against Pancho Villa and his men, The fort was once commanded by Charles Young, the first African American to be promoted to colonel. Fort Huachuca was declared a National Historic Landmark in 1977.

The Clovis people, were hunters of the now-extinct mammoth and other large game. They lived in the area 13,000 years ago. According to archaeologists, the area where the fort is located, was Inhabited since 600 C.E. by various Native-American tribes. Among those tribes were the Hohokam, Mogollon and the Trincheras. Apache pictographs from the 1700s were also discovered.

Father Kino, the traveling Padre of the Southwest, passed through this area in 1699. Father Kino was a Jesuit, missionary, geographer, explorer, cartographer and astronomer who established many missions in the Southwest.

After gold was discovered in California, pioneers of European heritage from the east coast of the United States, began to migrate to the West and Southwestern territories of the United States. Many of these pioneers settled in Arizona and some established travel routes by the area close to where the fort currently stands. The early settlers and travelers were under constant attack by the Chiricahua Apaches who would proceed to escape to sanctuary in Mexico via the routes through the San Pedro and Santa Cruz valleys.

Geronimo was a Chiricahua Apache who became a leader during the Apache Wars. On one occasion when Geronimo was 28 years old, he was away from his camp with the rest of the male Apache warriors. When they returned they saw that many of the women and children had been slaughtered, including Geronimo's mother, wife and three of his children. This incident set him on the path of fighting against the colonizing forces that sought to control and oppress the Apache and take their lands.

In 1886, Gen. Nelson A. Miles designated Fort Huachuca as his advance headquarters and forward supply base for the Geronimo campaign. In 1886, Miles replaced General George Crook as commander of the forces fighting against Geronimo, Miles relied on white troops, who eventually traveled 3,000 miles (4,800 km) without success as they tracked Geronimo through the tortuous Sierra Madre Mountains. First Lieutenant Charles B. Gatewood, who had studied Apache ways, succeeded in negotiating a surrender, under the terms of which Geronimo and his followers agreed to spend two years on a Florida reservation. Geronimo agreed on these terms, being unaware of the real plot behind the negotiations (that there was no intent to let them go back to their native lands). The exile included even the Chiricahuas who had worked for the army, in violation of Miles' agreement with them. Miles denied Gatewood any credit for the negotiations and had him transferred to the Dakota Territory.

After the surrender of Geronimo, trouble continued to brew with renegade Native-Americans, Mexican bandits; especially with the followers of Pancho Villa, and American outlaws and freebooters. In 1913, Fort Huachuca became the base for the 10th Cavalry Regiment "Buffalo Soldiers", which was composed of African Americans. The 10th Cavalry continued to fight the Apaches after Geronimo's surrender in 1886. A detachment of 10th Cavalry fought one of their last battles of the Apache Wars north of Globe at the Salt River during an expedition on March 7, 1890. After the battle Sergeant William McBryar, was awarded the Medal of Honor for his actions during the pursuit of the Apache warriors.

General John Pershing used the fort as a forward logistics and supply base from 1916 to 1917 in his expedition against Pancho Villa and his men. Pershing sent the 10th Cavalry in pursuit of Villa and his men. Then-Major Charles Young, an African-American, commanded a squadron of the 10th Cavalry during the “Punitive Expedition” into Mexico. In Mexico they were confronted by peasants with pro Villa sympathies. The authorities in Mexico considered it a disgrace if Villa was captured by the Americans and therefore provided misleading information which resulted in the failure of Pershing's Villa campaign.

Upon his return from Mexico, then-Lieutenant Colonel Young established a school for African American enlisted men at Fort Huachuca, Arizona. He foresaw the coming of future wars and was determined that men of his race would be prepared to enter an officers’ training camp if one should be established. Young, was the first African American to be promoted to colonel. On September 1916, he became the commander of Fort Huachuca.

The historic Old Post Cemetery was established in 1877 on the southwest corner of Grierson and Mizner Avenues. The cemetery was moved to its present location on May 18, 1883. Buried are many of the soldiers who perished during the Apache Wars including Apache Scouts and their families. There are over 4,124 U.S. Military Personnel buried in the cemetery. Among the buried are Apache Scout Shorten Bread, one of the Apache Scouts of General George Crook who helped to track Geronimo, and his son Shorten Bread, Jr. Miss Carrie A. Clark, who served as postmistress, is also buried there. Also buried in the cemetery is Colonel Louis A. Carter, the only African-American chaplain, who served with all four of the black regiments of the Regular Army. Carter was the second African-American Army chaplain to be promoted to colonel. At Fort Huachuca, he served as post chaplain from 1913 to 1915 and again from 1935 to 1940. There are some unmarked graves outside the cemetery's wall. Criminals were prevented from being buried within the cemetery itself. The "Mourning Hearts, A Soldier's Family", a bronze sculpture by Jessica McCain and presented by the Huachuca Museum Society in 1996, is situated inside the cemetery. The statue depicts a nameless woman and children mourning the loss of her husband, a Soldier with a backdrop of gravestones. The address of the 7.3 acre cemetery is 104 Burt Road. 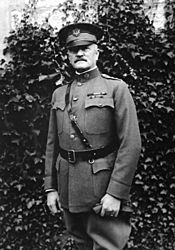 The historic properties, places and items pictured are the following: 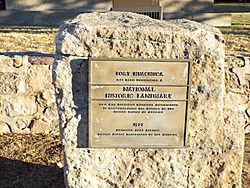 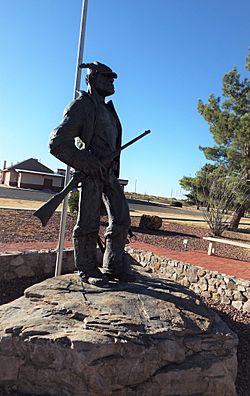 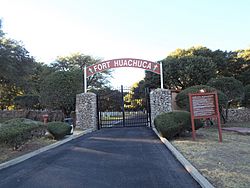 The historic properties which are not pictured are the following:

All content from Kiddle encyclopedia articles (including the article images and facts) can be freely used under Attribution-ShareAlike license, unless stated otherwise. Cite this article:
Historic properties in Fort Huachuca National Historic District Facts for Kids. Kiddle Encyclopedia.