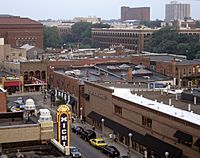 A view of Ann Arbor from Liberty and State Streets, showing the Michigan Theater, the Borders bookstore #1, and several buildings of the University of Michigan

The recorded history of Ann Arbor in the U.S. state of Michigan, began with settlers from various eastern states in early 1824.

The original founders were John Allen from Virginia and Elisha Rumsey from New York. On May 25, 1824, the town plat was registered with Wayne County as "Annarbour"; this represents the earliest known use of the town's name.

Their wives' names were both Ann (in the latter case, either Ann Rumsey or Ana Rumsey, depending on the text consulted). One account states that Allen and Rumsey decided to name the settlement "Annarbour", for their spouses (after discarding the alternative names Allensville and Anapolis) and for the stands of bur oak in the 640 acres (2.6 km²) of land they had purchased for US$800 from the federal government. The Native Americans of the region knew the settlement as Kaw-goosh-kaw-nick, after the sound of Allen's grist mill.

Several mills, a tannery, and a general store flourished in the settlement. The general store (or tavern, again depending on the source) was painted bright red and the corner on which it was established, at Huron and Main, became known as Bloody Corners. In 1836, Ann Arbor lost a bid to be established as the state capital. However, in 1837 Ann Arbor won a bid to be the new site for the University of Michigan when it offered forty acres (160,000 m²) of land for the site. The Michigan Central Railroad arrived in 1839, making the town a major regional transportation hub.

Ann Arbor became the seat of Washtenaw County in 1827, incorporated as a village in 1833, and was chartered as a city in 1851, which was also the year that John Allen died. The town became home first to large numbers of German immigrants from the state of Württemberg) and escapees from the Great Irish Famine (1845-1849), though Canadians accounted for the largest percentage of Ann Arbor's immigrants during most of the 19th century.

The 20th century and progressivism 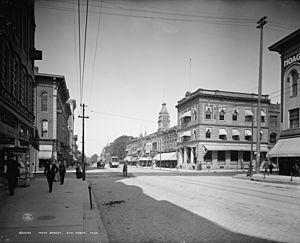 During World War I, Germans became targets of animosity because of their alleged sympathy for the German state, and four professors in the University's German department were dismissed because of what was alleged by the regents to be an "excess" of faculty in the department.

During World War II, Ford Motor Company's nearby Willow Run plant turned out B-24 Liberator bombers and the population of Ann Arbor exploded with an influx of military personnel, war workers, and their families.

In 1960, Ann Arbor was the site of major speeches by both major presidential candidates, John F. Kennedy and Richard Nixon. On October 14, 1960, Kennedy outlined his proposal for what would become the Peace Corps on the front steps of the Michigan Union (a plaque still marks the spot). On May 22, 1964, Lyndon B. Johnson unveiled his Great Society initiative during a University of Michigan commencement address.

During the 1960s, Ann Arbor became a locus for both the American civil rights movement and the anti-Vietnam War movement. It was, for example, the site of the first major meetings of Students for a Democratic Society in 1960. After a number of protests and an extensive public campaign, the city passed its first fair housing ordinance in 1963.

In June 1969, students and protesters took over portions of South University Avenue over the course of three days of protests and rioting. However, the police, drawn from many surrounding communities, and many with their names and badges covered up, took back the streets with the use of tear gas, police dogs, and the threat of firearms. In 1973, Kathy Kozachenko was elected to the Ann Arbor city council, becoming the nation's first openly gay candidate to run successfully for elected office.

Throughout the 1960s and 1970s, Ann Arbor was home to many influential rock bands, such as the MC5, Alice Cooper, Iggy Pop, Brownsville Station, George Clinton, Bob Seger and the Silver Bullet Band, Mitch Ryder, and The Rationals. Madonna was a dance major at the University of Michigan in the late 1970s. In 1969, avant-garde jazz bandleader Sun Ra and his Arkestra spent about a month living in an Ann Arbor frat house, with poet-impresario John Sinclair and his radical White Panther Party for next-door neighbors.

The economy of Ann Arbor underwent a gradual shift from a manufacturing base to a service and technology base over the course of the 20th century, a shift which accelerated in the 1970s and 1980s. As of 1999, Ann Arbor was home to 25 research centers and libraries.

During the same period, land values have increased and the city has gentrified. Some long-time residents have been driven out by high prices.

Conservative groups and movements have also started within the city. The Word of God, a charismatic Christian movement of global scope, started in 1967. Ann Arbor also became the site of the Thomas More Law Center, a leading religious-conservative advocacy group founded in 1999.

All content from Kiddle encyclopedia articles (including the article images and facts) can be freely used under Attribution-ShareAlike license, unless stated otherwise. Cite this article:
History of Ann Arbor, Michigan Facts for Kids. Kiddle Encyclopedia.