The history of Ashland, Kentucky: 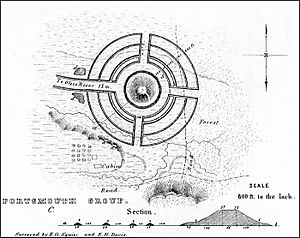 The present-day area of Ashland was originally inhabited by American Indians migrating southeast from Beringia, although their earliest dating remains controversial.

During the Woodland Period, the Adena culture left large earthworks downriver at South Shore's Biggs Site (c. 800 BC to 0). The Hopewell who succeeded them then expanded the complex into the great Portsmouth Earthworks (c. AD 0 to 500). Ashland lies between this group and the related but distinct Armstrong Culture who lived along the Big Sandy. Its Central Park includes six 4- to 5-foot (1.2 to 1.5 m) burial mounds, which have been placed on the National Register of Historic Places. They have not been excavated by archaeologists, but are thought to date to the Adena. The mounds within the city used to be more numerous but were mostly destroyed in its construction. The present mounds are actually restorations, having been rebuilt from smaller heaps; The city recently agreed to fence them.

The Hopewell and Armstrong were succeeded c. 1000 by the Fort Ancient Culture. The group closest to Ashland was the Feurt Focus, which developed into the Shawnee. The largest community nearby at the time of European exploration seems to have been Lower Shawneetown near South Portsmouth.

Ashland, first known as "Poage Settlement" and "Poage's Landing", was settled by at least two related groups of the Poage family of Virginia. Robert Poage and his sons Robert, Jr., and George, along with Major George Poage and his son John, held title to thousands of acres obtained by assignment from the William Bell patent and treasury land warrants. The first recorded land grant in the area was made to General James Wilkinson in 1783, from whom Robert Poage purchased a 5,000-acre (20 km2) grant. 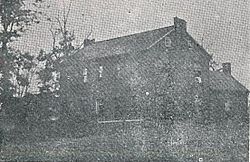 The Poages were of Scots-Irish stock, some coming to Kentucky directly from Virginia through the Cumberland Gap in 1786 and some from Virginia by way of Harrodsburg and Mayslick. They took farmlands on the Ohio River bottoms between the mouths of Keys Creek and Hoods Creek and operated a water-powered sawmill near the mouth of Hoods Creek, perhaps as early as 1799. The Poage settlement remained an extended-family community until the mid-19th century.

In 1800, Richard Deering, a farmer on the Little Sandy River in what is now the adjoining county of Greenup, made a discovery that made a tremendous impact on the area's development. While engaged in the process of boiling down salt for farm uses, Deering discovered high grade iron ore deposits on his property.

In 1815, he built a small cupola to produce farm and kitchen implements. Business grew, and in 1818, Deering, along with David and John Trimble, built Argillite Furnace. This was the beginning of the iron industry in northeastern Kentucky.

More furnaces were built and soon iron from Hanging Rock Iron Region became nationally known, due to the high quality of the product. Iron produced at these charcoal fired furnaces were hauled to Poage's Landing and Hanging Rock, Ohio, for shipment on the Ohio River to Pittsburgh and Cincinnati.

Poage's Landing soon became a center of industry for eastern Kentucky. The first post office was at Pollards Mill that was opened in 1847 by H. B. Pollard. (Seven years later, it was renamed "Ashland" after the incorporation of the town.) It was not until 1854, however, that industrial development began with the charter of the Kentucky Iron, Coal and Manufacturing Company by the Kentucky General Assembly. The company soon hired an engineer to lay out the new town of Ashland, named for Henry Clay's Lexington estate. Martin Toby Hilton was given the task of laying out the streets; at the time, Ashland was nothing more than a few businesses lining Front Avenue and a few residences scattered along the Ohio River and near the foothills. The layout was quite controversial at the time: 100-foot (30 m) streets were considered too wide.

In 1854, Levi Hampton, one of the founders of the Kentucky Iron, Coal and Manufacturing Company, suggested that Poage Settlement be renamed to "Ashland". A name change was inevitable, as the city was becoming an industrialized region, not a mere 'settlement.' Hampton, who was an admirer of Henry Clay of Lexington and his estate, Ashland, requested the renaming to "Ashland" in respect of the famous politician. It was accepted unanimously. Lots were sold at public auction in June 1854, and the City of Ashland was incorporated by an act of the Kentucky Legislature in 1856. Boyd County was created by the Legislature in 1860, primarily from Greenup County. The first child born in the new town of Ashland was named Ashland Poage, a mixture of the old and new names. 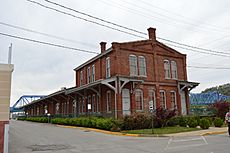 The Ashland Amtrak Station was built by the C&O Railroad in the 1890s as a freight house.

Major industrial employers in the first half of the 20th century included the Armco, the Ashland Oil and Refining Company, the C&O Railroad, Allied Chemical and Dye Company's Semet Solvay and Mansbach Steel.

One of the largest industrial developments in Ashland was announced in 1920. President George M. Verity, president of Armco, proposed to construct a steel mill. When it was completed on October 19, 1923, it featured a continuous rolling method to produce steel sheets, the first of its kind in the nation. Armco later purchased the old Ashland Steel Company, followed by the Norton Iron Works and the Old Iron Furnaces.

In 1925, the Ashland Culvert Works company was founded, later purchased by Armco and renamed to the Armco Drainage and Metal Products Company.

In 1950, a $40 million expansion was completed. A new hot-strip mill was opened on May 20, 1953 that employed 3,000. One year later, a cold reduction mill, strip pickler, light gauge zincgrip and a heavy gauge zincgrip was completed at a cost of $12 million. At the close of the 1950s, Armco announced another $95 million upgrade, later upgraded to $145 million. In 1963, the Amanda blast furnace was completed as part of the upgrade.

In August 1984, Tom Gorder became the president of Armco's Ashland Works. Trying to stem the loss of 2,000 jobs in 10 years, he stated he would help consolidate Ashland and Middletown, Ohio's steel mills together in an effort to improve efficiency. That resulted in the closure of the hot strip mill, however, a new slab caster was constructed that provided steel slabs for Middletown. The hot strip mill's closure in 1992, however, eliminated 930 jobs. The Sinter plant, cold strip mill, temper mills, pickling lines, annealing lines and machine shop all closed by 1995.

In May 1989, Armco sold 40 percent of its company to Kawasaki Steel of Japan; the remainder was sold in 1994 and the plant was renamed for AK Steel.

By becoming more efficient, the plant saw increasing profits. The workforce increased to 900 by 2004. On April 2, 2004, Governor Ernie Fletcher announced a $40 million tax break that would help fund a vacuum degassing unit and modification to the slab caster, crucial to coke making and steel options. The modifications also made steel production for automobiles easier. 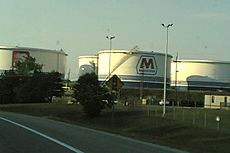 Storage tanks at the Catlettsburg Refinery

Constructed in 1912 east of the central business district, this coke plant featured 54 horizontal flue coke ovens. Four years later, an additional battery of 54 ovens was constructed. In 1937, the two original 54 batteries were expanded to 60 each.

Another large expansion took place in 1953 with the installation of a third battery. The 76 vertical flue ovens expanded capacity and increased employment. It was constructed by the Wilputte Coke Oven Division, which Allied had purchased only several years prior. It is now closed as of June 2011 and to be torn down.

In the early 1950s, a research laboratory was constructed as well.

The Ashland Oil and Refining Company was founded in 1924 and had purchased a small refinery near Catlettsburg that had a 1,000-a-day capacity. Its first product was "Pepper" gasoline, later renamed to "Ashland."

Following the flood of 1937, discussions for a new floodwall were initiated. Construction began in July 1949 and was completed in December 1953 at a cost of $3.872 million. 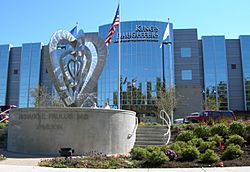 The continued growth of Ashland into the unincorporated areas just outside the city limits has reduced the city's population. Ashland has two zip codes, 41101 which is mainly within the city limits, and 41102 which serves part of the city and the surrounding unincorporated areas of the county. These two zip codes combined contain approximately 40,000 residents, which is more reflective of the Ashland community's size. In 1975, a proposal was floated to combine the governments of both Boyd County, Ashland, and Catlettsburg. It failed 12,514 to 2,518 due to the polarity between the two cities. A similar proposal soon after, Unigov, was soundly defeated in 1993.

Those pillars of the city, such as Armco (now known as AK Steel) began reducing their workforce in an effort to stay competitive. Many of the job functions at the steel mill were outsourced to local contractors in an effort to stay competitive. The Bellefonte Furnace at the steel making plant was mothballed and the hot strip was discontinued. CSX, formerly known as Chesapeake and Ohio Railroad, operates one of the largest switchyards in the world in nearby Russell and Raceland.

Taking the place of the industrial base that once supported Ashland is the service sector. King's Daughters Medical Center has expanded from a relatively small medical facility to the largest employer west of Charleston, West Virginia and east of Lexington. In the past ten years alone, the footprint of the hospital has been more than doubled. Although the city proper has declined in population, this was mainly the result of the city not annexing surrounding areas as they have developed and new commercial developments replacing former residential zones.

On October 4, 1989, the Ashland Town Center opened with Wal-Mart, Hess's department store, and J.C. Penney, along with 12 speciality shops and a food court. The 500,000 sq ft (46,000 m2). mall was constructed along US 23 (Winchester Ave.) and eventually contained 87 stores and restaurants when it had its grand opening on October 19. Several months later, the 600,000 sq ft (56,000 m2). Cedar Knoll Galleria opened on November 8 along US 60. When the malls were opened, Ashland Town Center was considered to be more convenient, but faced the obstacle of being built on a former wetlands and by non-union labor. However, as time passed, Ashland Town Center flourished while Cedar Knoll Galleria diminished until, in 2004, the Zamias Corporation, owners of the mall went bankrupt. The property was bought by Reyton Cedar Knoll LLC and re-christened as Kyova Mall.

All content from Kiddle encyclopedia articles (including the article images and facts) can be freely used under Attribution-ShareAlike license, unless stated otherwise. Cite this article:
History of Ashland, Kentucky Facts for Kids. Kiddle Encyclopedia.