A hotdish is a dish that typically contains a starch, a meat, and a canned or frozen vegetable mixed with canned soup. A classic example is made with ground beef over tater tots with cream of mushroom soup, but some versions in Minnesota use the official state grain wild rice, or even macaroni, in place of the potatoes. The dish originates in the Upper Midwest region of the United States, where it remains popular, particularly in Minnesota, South Dakota, Wisconsin, and North Dakota. Hotdish is cooked in a single baking dish, and served hot (per its name). It commonly appears at communal gatherings such as family reunions, potlucks, and church suppers. 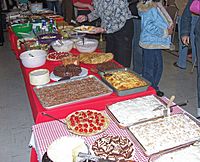 A typical covered dish dinner or potluck with desserts and bars at one end, salads, and hot dishes at the other end

The history of the hotdish goes back to when "budget-minded farm wives needed to feed their own families, as well as congregations in the basements of the first Minnesota churches." According to Howard Mohr, author of How to Talk Minnesotan, "A traditional main course, hotdish is cooked and served hot in a single baking dish and commonly appears at family reunions and church suppers." The most typical meat for many years has been ground beef, and cream of mushroom remains the favorite canned soup. In years past, a pasta was the most frequently used starch, but tater tots and local wild rice have become very popular as well.

Hotdishes are filling, convenient, and easy to make. They are well-suited for family reunions, funerals, church suppers, and covered dish dinners or potlucks where they may be paired with potato salad, coleslaw, Jello salads, Snickers salad, and pan-baked desserts known as bars. 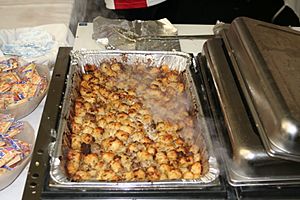 Typical ingredients in hotdish are potatoes or pasta, ground beef, green beans, and corn, with canned soup added as a binder, flavoring and sauce. Potatoes may be in the form of tater tots, hash browns, potato chips, or shoe string potatoes. The dish is usually seasoned lightly with salt and pepper, and it may be eaten with ketchup as a condiment. Another popular hotdish is the tuna hotdish, made with macaroni or egg noodles, canned tuna, peas, and mushroom soup. Also common is a dish known as goulash, though it bears no resemblance to the familiar Hungarian goulash. Minnesota goulash is usually made with ground beef, macaroni, canned tomatoes, and perhaps a can of creamed corn.

Cream of mushroom soup is so ubiquitous in hotdish that it is often referred to in such recipes as “Lutheran Binder,” referring to hotdish's position as a staple of Lutheran church cookbooks. The soup is considered a defining ingredient by some commentators.

After the 2010 U.S. midterm elections, then Senator Al Franken invited the members of the Minnesota congressional delegation to a friendly hotdish-making competition, to come together in celebration of the state before the beginning of the legislative session. Six out of 10 delegation members — Sens. Franken and Amy Klobuchar and Representatives Michele Bachmann, Tim Walz, Keith Ellison and Betty McCollum — participated, with Klobuchar taking first place with her "Taconite Tater Tot Hotdish" and Walz taking second with his "Chicken Mushroom Wild Rice Hotdish".

With 9 of the 10 members of the delegation participating in 2013, the winner was Congressman Walz's "Hermann the German Hotdish", which featured a bottle of August Schell beer. Sen. Franken has also provided a free PDF version of the 2013 Hotdish Off collection of recipes.

All content from Kiddle encyclopedia articles (including the article images and facts) can be freely used under Attribution-ShareAlike license, unless stated otherwise. Cite this article:
Hotdish Facts for Kids. Kiddle Encyclopedia.