Hurricane Gordon was a very damaging tropical storm for the Caribbean, Florida and parts of North Carolina. The storm was very slow moving on its path over the Caribbean. This storm killed over 1100 people (estimates are between 500-2300 people dead through Haiti and the central Caribbean islands, including Jamaica and Cuba). The storm's strange motion was making Hurricane Gordon hard to forecast where it would actually go and where it would reach land. Hurricane Gordon was the last storm of the inactive 1994 Season and the second most costly of the 1994 season, even though the storm was a hurricane for only a few hours. 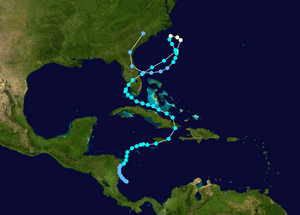 On November 8 a tropical wave near Costa Rica became Tropical Depression Twelve. On November 10th in made landfall near Puerto Cabezas, Nicaragua. The same day it became Tropical Storm Gordon after moving back into the Caribbean. It made its first landfall near Kingston, Jamaica on November 13 it soon made its second landfall in Guantanamo Bay, Cuba on the same day. The storm brushed the northern coast of Cuba and the southern islands of the Bahamas. It made its third landfall in Key West, Florida on November 15. Gordon turned northeast and made it fourth landfall in Fort Myers, Florida the next day. When Gordon crossed Florida it took about nine hours and it went into the Atlantic Ocean on a northeastward track. Gordon stayed on that track until November 17, when it became Hurricane Gordon while it was about 245 miles southeast of Cape Fear, North Carolina. Shortly after becoming a hurricane it reached top winds of 85 mph and then brushed the coast of North Carolina. Gordon weakened back to a tropical storm and started on a U-shaped track. Gordon weakened further into a tropical depression and on November 19 it made its fifth and last landfall near Vero Beach, Florida and on November 21 Gordon died out while over South Carolina.

The damage in Haiti is unknown. But in Haiti, Hurricane Gordon killed about 1,122 people. The number is high likely because of mudslides and because of the deforestation (removing trees) of the forests in Haiti.

Florida was where most of the damage was. Damage in Florida was at about $400 million. Gordon also crossed the state three times, which is likely why the damage is that high.

All content from Kiddle encyclopedia articles (including the article images and facts) can be freely used under Attribution-ShareAlike license, unless stated otherwise. Cite this article:
Hurricane Gordon (1994) Facts for Kids. Kiddle Encyclopedia.