Ilkeston is a town within the Borough of Erewash, in Derbyshire, England. It lies on the River Erewash, from which the local borough takes its name. Its population at the 2001 census was 37,550, increasing to 38,640 at the 2011 Census. Its major industries were traditionally coal mining, iron working and lace making / textiles, but these have all but disappeared in the last few decades.

The town is close to both Derby and Nottingham and is near to the M1 motorway. Although Ilkeston lies within Derbyshire, it is closer to Nottingham than it is to Derby. The eastern boundary of Ilkeston is only two miles from Nottingham's western edge. Ilkeston is considered by the Office for National Statistics to be part of the Nottingham Urban Area.

Ilkeston was probably founded in the 6th century AD, and gets its name from its supposed founder, Elch or Elcha, who was an Anglian chieftain ("Elka's Tun" = Elka's Town). The town appears as Tilchestune in the Domesday Book when it was owned principally by Gilbert de Ghent. Gilbert also controlled nearby Shipley, West Hallam and Stanton by Dale. Ilkeston was created a borough by Queen Victoria in 1887.

Ilkeston is one of several places where the distinctive dialect of East Midlands English is extensively spoken. Ilkeston is referred to as 'Ilson' in this dialect.

The American Adventure, a large theme park which closed in 2007, was located on the outskirts of Ilkeston on the former Woodside Colliery adjoining Shipley Country Park.

One of the biggest and most important local employers was the Stanton Ironworks, later known as Stanton and Staveley - the continuation of a long-standing tradition of iron working in this area. There has been evidence of iron working and quarrying in the area since Roman times, and the industry began blossoming into a huge industrial concern in the 1780s. By the mid-19th century there were several blast furnaces and the production rose from around 500 tons of pig iron per month to 7,000 at the end of the century. Steel pipe manufacturing began at Stanton after World War I and later concrete pipes were produced, Stanton being the first in the UK to develop the 'spun pipe' process. 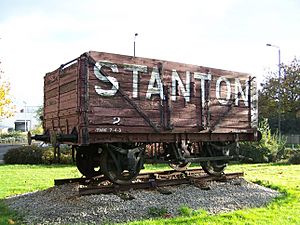 In the mid-19th century the works produced 20,000 tons of iron castings per year, 2.5 millions by 1905. Up to 12,500 people were employed during the period when the works were part of British Steel Corporation, of which 7,000 worked at the Stanton works.

During its long existence the works produced huge quantities of a variety of products, including pig iron, tunnel castings, (used in projects such as the London Underground), pipes and street furniture as well as bitumen, roadstone, chemicals and munition casings. It is likely that if you live in the UK, you are not far away from a S&S manhole cover or lamp post.

The works gradually declined, the business being run from 1985 by the French Saint-Gobain Group. The last casting was an emotional event in 2007. The huge Stanton site has been partially given over to business park and the rest of the site is earmarked for redevelopment which is subject to local opposition.

Ilkeston Market Place is the site of a Charter fair. The fair celebrated its 760th anniversary in 2012, the Charter being granted by King Henry III in 1252. This makes the fair older than Nottingham's famous Goose Fair and it is one of the largest street fairs in the Country, indeed in Europe.

The present fair developed from two separate fairs, as another 'agricultural hiring fair' or 'Statutes Fair' was traditionally held on Wakes week in October as well as the original Charter Fair which was held on the Feast of the Assumption of the Blessed Virgin Mary (15 August). The two fairs were combined in 1888 and the one Charter Fair has been held in October ever since.

Since 1931 the fair has been officially opened by the Mayor - first of Ilkeston and since 1974 of Erewash - on the Fair Thursday at noon with the Town Clerk (Chief Executive) reading the Charter from the steps of the Town Hall.

From early in the 19th century the existence of natural mineral waters was noted here and exploited. A local businessman Thomas Potter built, in 1831, the famous Ilkeston Bath at the bottom of Town Street attached to the Rutland Hotel. For over 60 years the baths helped tourism to the town at a time when spa towns like Bath and Harrogate enjoyed popularity. 'If you're doubled in pain and thin as a lath, Come at once then and try, the famed Ilkeston Bath,' was a well known advertising slogan. A mixture of a general decline in the popularity of spa bathing and, reportable, contamination of the waters from mining activities led to the eventual closure of the baths just before 1900. The baths and the adjacent Rutland Hotel, which also enjoyed a revenue from tourism, no longer exist though they are remembered in the name of 'Bath Street'.

Ilkeston is twinned with:

All content from Kiddle encyclopedia articles (including the article images and facts) can be freely used under Attribution-ShareAlike license, unless stated otherwise. Cite this article:
Ilkeston Facts for Kids. Kiddle Encyclopedia.