Lookout from the Illawarra Escarpment above Wombarra over the northern Illawarra plain viewing Austinmer, Thirroul, Bulli, Wollongong up to Port Kembla in the far.

Illawarra is a region in the Australian state of New South Wales. It is a coastal region situated immediately south of Sydney and north of the Shoalhaven or South Coast region. It encompasses the cities of Wollongong, Shellharbour, the town of Kiama and the shire of Wingecarribee.

The Illawarra region is characterised by three distinct districts: the north-central district, which is a contiguous urban sprawl centred on Lake Illawarra; the western district defined by the Illawarra escarpment, which leads up to the south-west fringe of Greater Metropolitan Sydney including the Macarthur and Southern Highlands regions; and the southern district, which is historically semi-rural (area undefined), yet now defined by increasing urbanisation. 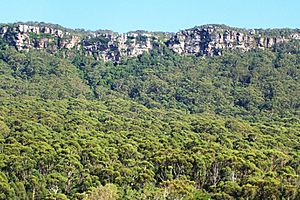 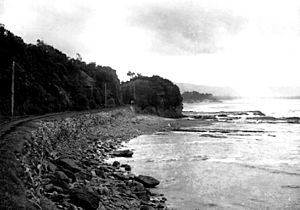 A section of the Illawarra coastline, circa 1900

The region consists of a coastal plain, narrow in the north and wider in the south, bounded by the Tasman Sea on the east and the mountainous, almost impassable Illawarra escarpment (forming the eastern edge of the Southern Highlands plateau) to the west. In the middle of the region is Lake Illawarra, a shallow lake formed when sediment built up at the entrance to a bay. The district extends from the southern hills of the Royal National Park in the north to the Shoalhaven River in the south, and contains the city of Wollongong, the third-largest urban area in New South Wales. North of Wollongong the plain narrows to a small strip of land between the coast and the escarpment. At Coalcliff and Stanwell Park small valleys are formed allowing further settlement. To the south it widens, and becomes increasingly hillier before reaching Stockyard Mountain, a long divide between the main plain and the Jamberoo Valley, which stretches until it reaches Kiama. South of Kiama is Saddleback Mountain and south of that the Shoalhaven plains and the outcrop of Coolangatta Mountain.

The main industries in the area have traditionally been farming, coal mining and steel making. Australia's largest steel-works, BlueScope Steel, operates at Port Kembla. The area, especially around Port Kembla and Wollongong, was once known for its mainly industrial jobs, but since the 1990s commerce has played an increasing role in the city, overtaking industry in many areas.

The Illawarra region is linked to Sydney by several passes and a motorway (Southern Freeway) and electric railway (see Illawarra railway line); to the west by the Illawarra Highway and Picton Road; and to the south by the Princes Highway. At Albion Park Rail the Illawarra Regional Airport serves the region.

The word "illawarra" is derived from the Aboriginal Tharawal word "allowrie," also sometimes spelled as "elouera" or "eloura." According to A. W. Reed, the word is variously translated as "pleasant place near the sea" or "high place near the sea." The prefix of "illa" is also known to mean "white clay;" with the suffix "warra," sometimes spelled as "wurra," meaning "mountain" in the local indigenous language. George Bass and Matthew Flinders were the first Europeans to visit the area, with Flinders recording that it 'was called "Allowrie" by the natives'.

For the period around 1806, the region was called "Five Islands"; referring to the group of five islands off Red Point. In 1817 Governor Macquarie, referring to region, wrote: 'part of the coast known generally by the name of the Five Islands, but called by the natives "Illawarra".

Illawarra cattle were originally bred in Illawarra and are now Australia's 3rd largest breed in population. They are large Dark red cows sometimes with white patches. They produce large amounts of high butter fat and high protein milk and are really durable and suited to the Australian climate.

Coal mining has been a key part to the Illawarra's economy for over 200 years.

All content from Kiddle encyclopedia articles (including the article images and facts) can be freely used under Attribution-ShareAlike license, unless stated otherwise. Cite this article:
Illawarra Facts for Kids. Kiddle Encyclopedia.