Isle au Haut is a town in Knox County, Maine, United States, on an island of the same name in Penobscot Bay. The population was 73 at the 2010 census. Home to portions of Acadia National Park, Isle au Haut is accessible by ferry from Stonington, Maine. 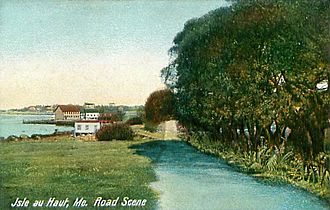 Native Americans left behind shell mounds on the island following their oyster feasts. It was territory of the Penobscot Abenaki Indians when, in 1604, French explorer Samuel de Champlain named it Isle au Haut, meaning High Island. English Capt. John Smith, charting the coast in 1614, noted that it was the highest island in Penobscot Bay. It was included in Deer Isle Plantation, incorporated by Massachusetts on February 2, 1789, as the town of Deer Isle.

In 1792, Henry Barter was granted land on the island, which by 1800 had a population of about 50 English and Scottish settlers. They subsisted by raising sheep, farming and fishing. In 1808, the island was the scene of a murder when smugglers shot and killed a federal customs officer. In the mid-19th century, the chief occupations were fishing and boatbuilding. On February 28, 1874, Isle au Haut was set off from Deer Isle and incorporated as a town.

By the late 19th century, when the island's population reached about 275, a village had developed beside the Isle au Haut Thoroughfare separating Kimball Island. The 1880s brought an influx of "rusticators," seasonal inhabitants, often from Boston and other big cities, who built vacation cottages at a private club at Point Lookout. In 1910, Isle au Haut had 178 year-round residents and 15 summer families. Some fishermen left when motors replaced sails to power boats, allowing them to operate more conveniently from the mainland. By 1935, the population had dropped to 75.

Today, lobster fishing remains the main industry, while the portions of Acadia National Park which cover about 60% of the island attract a few tourists. Vacation houses, although far fewer than those of the nearby summer colonies of North Haven, Vinalhaven and Mount Desert Island, more than double Isle au Haut's population during the summer. Linda Greenlaw wrote a book about it titled The Lobster Chronicles (2003). Gordon Bok wrote a song entitled 'The hills of Isle au Haut'. 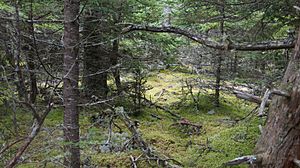 Mount Champlain, elevation 540 feet (160 m), is the highest point on the island, located on a north-south ridge occupying the island's center. Rocky Mountain, elevation 511 feet (156 m), and Sawyer Mountain, at 486 feet (148 m), are neighboring summits along the ridge to the south. The terrain consists of low hills covered by temperate coniferous forests; the coastline is mainly granite boulders, with a few rocky beaches and salt marshes. Long Pond, a small freshwater lake, stretches down the eastern side of the island; being warmer and more sheltered than the surrounding ocean, it is used for recreation and one may occasionally see a float plane, although no scheduled service is available.

There were 42 households of which 21.4% had children under the age of 18 living with them, 19.0% were married couples living together, 9.5% had a female householder with no husband present, 11.9% had a male householder with no wife present, and 59.5% were non-families. 45.2% of all households were made up of individuals and 14.3% had someone living alone who was 65 years of age or older. The average household size was 1.74 and the average family size was 2.41.

There were 32 households out of which 34.4% had children under the age of 18 living with them, 59.4% were married couples living together, 3.1% had a female householder with no husband present, and 34.4% were non-families. 25.0% of all households were made up of individuals and 3.1% had someone living alone who was 65 years of age or older. The average household size was 2.47 and the average family size was 3.05.

All content from Kiddle encyclopedia articles (including the article images and facts) can be freely used under Attribution-ShareAlike license, unless stated otherwise. Cite this article:
Isle au Haut, Maine Facts for Kids. Kiddle Encyclopedia.