James Sanks Brisbin (May 23, 1837 – January 14, 1892) was an American educator, lawyer, historian, author and soldier. He served as a Union Army general during the American Civil War. After the conflict he remained in the military for the rest of his life, and authored several works on a variety of subjects.

Brisbin was born in 1837 at Boalsburg, Pennsylvania, a son of Margaret and Ezra Brisbin. He studied at the Boalsburg Academy, and upon graduating Brisbin began teaching. He later purchased and edited the Centre Democrat newspaper in Bellefonte, Pennsylvania, and also studied law and was later admitted to the bar of Pennsylvania. Brisbin was prominently known as an anti-slavery orator.

When the American Civil War began in 1861, Brisbin was a lawyer in practice. He enlisted in the Pennsylvania volunteer services that April as a private. On April 26, he was appointed a second lieutenant in the mounted 2nd U.S. Dragoons. He fought in the First Battle of Bull Run near Manassas, Virginia, on July 21. In this battle, Brisbin received two wounds, one in his side and the other in an arm, and was praised by his superiors for his performance during the fight.

On August 3, 1861, Brisbin transferred to the 1st U.S. Cavalry (previously known as the 1st Dragoons until a reorganization of the army) but then was appointed a captain in the 6th U.S. Cavalry two days later. On June 9, 1862, he fought during the action near Beverly Ford, Virginia, and was again wounded when he fell off of his horse. Exactly one year later Brisbin was brevetted to the rank of major for his conduct at Beverly Ford. In 1863 he very briefly led the cavalry forces in the Federal Department of the Susquehanna, and was wounded in a leg during combat near Greenbrier, Virginia, on July 26.

Brisbin was promoted to colonel on March 1, 1864, and organized the 5th United States Colored Cavalry. He served as the acting head of cavalry on the staff of Brig. Gen. Albert L. Lee during the Red River Campaign, and was again wounded during the Battle of Mansfield in Louisiana on April 8, this time in the right foot. On December 12, 1864, Brisbin was brevetted to brigadier general in the Union Army, and seven days later was appointed a brevet lieutenant colonel in the regular army for his performance at Battle of Marion in Tennessee. In 1865, he was on recruiting duty in Kentucky, serving on the staff of Maj. Gen. Stephen G. Burbridge. On March 13, Brisbin was brevetted to colonel in the regular army as well as brevetted major general in the Union Army, and on May 1 he was promoted to brigadier general. Brisbin was mustered out of the Union Army as a volunteer on January 15, 1866. 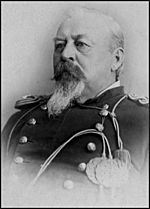 After the war, Brisbin remained in the regular army, aiding in the establishment of other colored regiments and served in the Northwestern United States as an officer in several cavalry regiments. From 1868–92, he served as an officer in several cavalry regiments, including the Second, Ninth, First, and Eighth regiments in the Northwestern United States. Brisbin was in command of the 2nd Cavalry of General John Gibbon's Montana Column at the time of the Little Big Horn campaign. Brisbin offered four companies of his 2nd Cavalry to General George Armstrong Custer at the final command meeting of Generals Terry, Gibbon, and Custer just prior to the final march into the Big Horn valley, but Custer declined it, stating that the 7th Cavalry alone could defeat the hostiles. Brisbin never forgave Custer for this. In various correspondence Brisbin was openly critical of Custer's actions - whether or not because of personal jealousy cannot be determined. Brisbin also penned the then-bestselling "Beef Bonzana" which urged investment in Open Range Cattle. At the time of his death he was a colonel in command of the Eighth Cavalry Regiment and was in command at Fort Meade. Brisbin died on January 14, 1892 in Philadelphia. He was buried in Oakwood Cemetery in Red Wing, Minnesota.

Brisbin married Mary Jane Wagner on June 15, 1861. They had four children. His wife died at Fort McKinney in 1887. In 1891 he married Amelia Wilson in Red Wing, Minnesota.

He was also a prolific writer, and contributed articles and letters to Eastern periodicals on many subjects throughout his career. He was known for his works on the Army Indian Wars, the West and Montana Territory.

All content from Kiddle encyclopedia articles (including the article images and facts) can be freely used under Attribution-ShareAlike license, unless stated otherwise. Cite this article:
James Sanks Brisbin Facts for Kids. Kiddle Encyclopedia.