Jan Hendrik Oort ForMemRS (28 April 1900 – 5 November 1992) was a Dutch astronomer who made significant contributions to the understanding of the Milky Way and who was a pioneer in the field of radio astronomy.

His New York Times obituary called him "one of the century's foremost explorers of the universe"; the European Space Agency website describes him as, "one of the greatest astronomers of the 20th century", and states that he "revolutionised astronomy through his ground-breaking discoveries." In 1955, Oort's name appeared in Life magazine's list of the 100 most famous living people. He has been described as "putting the Netherlands in the forefront of postwar astronomy." 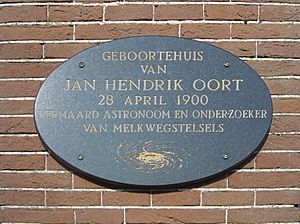 Oort determined that the Milky Way rotates and overturned the idea that the Sun was at its center. He also believed the existence of the mysterious invisible dark matter in 1932, which is believed to make up roughly 84.5% of the total matter in the Universe. He discovered the galactic halo, a group of stars orbiting the Milky Way but outside the main disk. Additionally Oort is responsible for a number of important insights about comets, including the realization that their orbits "implied there was a lot more solar system than the region occupied by the planets."

The Oort cloud, the Oort constants, and the Asteroid, 1691 Oort, were all named after Jan Oort.

All content from Kiddle encyclopedia articles (including the article images and facts) can be freely used under Attribution-ShareAlike license, unless stated otherwise. Cite this article:
Jan Oort Facts for Kids. Kiddle Encyclopedia.