Jarome Arthur-Leigh Adekunle Tij Junior Elvis Iginla (born July 1, 1977) is a Canadian professional ice hockey forward who is a free agent. He most recently played for the Los Angeles Kings of the National Hockey League (NHL). He was a longtime member of the Calgary Flames and also played for the Pittsburgh Penguins, Boston Bruins, Colorado Avalanche and Los Angeles Kings.

As a junior, Iginla was a member of two Memorial Cup winning teams with the Kamloops Blazers and was named the Western Hockey League (WHL) Player of the Year in 1996. He was selected 11th overall by the Dallas Stars in the 1995 NHL Entry Draft, but was traded to Calgary prior to making his NHL debut.

He led the NHL in goals and points in 2001–02, and won the Lester B. Pearson Award as its most valuable player as voted by the players. In 2003–04, Iginla led the league in goals for the second time and captained the Flames to the Stanley Cup Finals, leading the playoffs in goals. 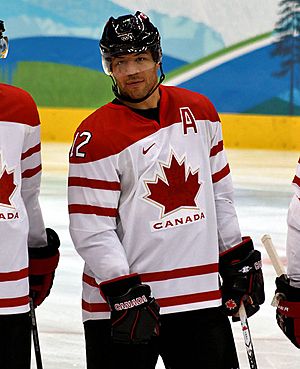 A six-time NHL All-Star, Iginla is the Flames' all-time leader in goals, points, and games played. Iginla scored 50 goals in a season on two occasions and is one of seven players in NHL history to score 30 goals in 11 consecutive seasons. He is one of 20 players in NHL history to score over 600 goals and is one of 34 players to record 1,300 points in his career. He is a past winner of the Mark Messier Leadership Award and has been recognized by both the Flames and the league for his community work; while a member of the Flames, Iginla donated $2,000 to the children's charity Kidsport for every goal he scored.

Internationally, Iginla has represented Canada on numerous occasions. He was a member of championship teams at the 1996 World Junior and 1997 World Championships as well as the 2004 World Cup of Hockey. He is a three-time Olympian and two-time gold medal winner, including at the 2002 Winter Olympics where he helped lead Canada to its first Olympic hockey championship in 50 years. 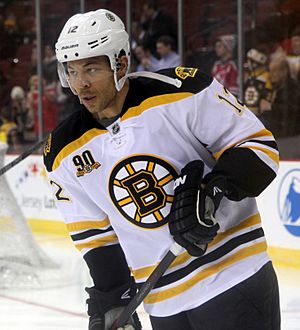 Iginla was born and raised in Edmonton, Alberta. His father, a lawyer, was originally from Nigeria and changed his first name from Adekunle to Elvis when he arrived in Canada. His surname means "Big tree" in Yoruba, his father's native language. Iginla's mother is originally from Oregon. Iginla grew up with his mother and grandparents after his parents divorced when he was a year old.

In addition to hockey, Iginla played baseball as a young man and was the catcher on the Canadian national junior team. He credits his grandfather for his hockey career, as with his mother working and father attending law school, he would not have had the opportunity to play sports at a high level if not for his grandfather's support. Iginla grew up admiring other black hockey players, including Edmonton Oilers goaltender Grant Fuhr. He played his entire minor hockey career in St. Albert, leading the Alberta Midget Hockey League in scoring as a 15-year-old with 87 points for the St. Albert Midget Raiders in 1992–93.

All content from Kiddle encyclopedia articles (including the article images and facts) can be freely used under Attribution-ShareAlike license, unless stated otherwise. Cite this article:
Jarome Iginla Facts for Kids. Kiddle Encyclopedia.