Jaroslav Halák (born 13 May 1985) is a Slovak professional ice hockey goaltender who is currently playing with the New York Islanders in the National Hockey League (NHL). Halák was the 271st overall pick by the Montreal Canadiens in the ninth and final round of the 2003 NHL Entry Draft. 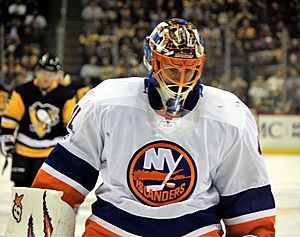 Before playing in the NHL, Halák played 9 games with Bratislava in the Slovak Junior league, 12 games with HC Slovan Bratislava of the Slovak Extraliga and 47 games with the Lewiston Maineiacs of the Quebec Major Junior Hockey League (QMJHL).

He was drafted with the 271st overall pick by the Montreal Canadiens in the 2003 NHL Entry Draft. Before he played with the Canadiens, he would play for their AHL-affiliate Hamilton Bulldogs.

On May 1, 2014, when he became a pending unrestricted free agent, his rights were traded by the Capitals to the New York Islanders for a 4th round pick in the 2014 Entry Draft. On May 22, 2014, the Islanders signed him to a four-year contract worth $18 million.

All content from Kiddle encyclopedia articles (including the article images and facts) can be freely used under Attribution-ShareAlike license, unless stated otherwise. Cite this article:
Jaroslav Halák Facts for Kids. Kiddle Encyclopedia.