Johnstone (Scots: Johnstoun, Scottish Gaelic: Baile Iain) is a town in the council area of Renfrewshire and larger historic county of the same name in the west central Lowlands of Scotland. 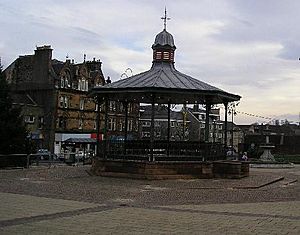 Houston Square with bandstand and fountain gifted by the Laird, George Ludovic Houston, in 1891.

Johnstone was largely a planned community which grew up around the house of Easter Cochrane, later known as Johnstone Castle, seat of the Houston or Houstoun family who gained their name from the nearby village of Houston. In 1782, the Laird, George Houstoun, commissioned designs for a series of regular residential streets which now form the town centre. At this early stage of development, the town’s population including the local estate and rural hinterland was around 1,500. Two mirroring civic squares were also constructed in the town: Houstoun Square and Ludovic Square, the latter named for the Laird's son, and by 1794 the town had gained its current parish church. Johnstone was raised to the status of a police burgh with significant local powers, a status which is now defunct. 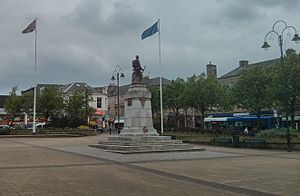 The war memorial in Houstoun Square

Industrial development brought both prosperity and poverty to the community. Coal mining occurred in Johnstone, although its main industry was related to the thread and cotton industries, with mills powered by the Black Cart Water which runs to the north of Johnstone. A six-storey cotton mill, one of the largest in Scotland, was built in 1782, and was rescued from failure by Robert Burns of Paisley sometime before 1812. Burns introduced Richard Arkwright's methods for spinning cotton. As the community expanded, slum conditions formed in part of the town: the population by 1831 had increased to a sizeable 5,600. Unfortunately, the owners of Johnstone mill did not make much philanthropic progress among their worker population, and the situation was not addressed until the 1930s by a significant expansion of the size of Johnstone to include a number of purpose-built residential estates.

Much of Johnstone’s feudal heritage has disappeared. With the death of the last Laird in 1931, Johnstone Castle found some other uses before falling into disrepair and being largely demolished.

A dual carriageway, the A737 connects Johnstone to the M8 motorway to provide car transport links to central Scotland.

McGill's Bus Service Limited operate the majority of local services from their depot in the west end of Johnstone.

Key Coaches are a local service operator based in Elderslie.

Other services are provided by many other operators. They are as follows:

Johnstone is linked to Glasgow Central, Paisley and the Ayrshire coast by the Johnstone railway station which is located at the east of the town on Thorn Brae. A second unmanned station Milliken Park railway station lies at the west end of the town, just off the Cochranemill road. The railway line runs through the cutting of the old Glasgow–Ardrossan canal, although the route of the canal runs under the original bridge, Dick's Bridge, at the bottom of the Thorn Brae, where the canal basin was situated and in winter, the rim of the canal basin sometimes becomes visible.

It may be noted that a second railway line ran through the town serving the villages of Kilbarchan, Bridge of Weir, and Kilmacolm; the line now forms part of the Clyde to Forth cycle route (National Cycle Route 75). It had a station serving the Northern, more industrial areas of town, Johnstone North railway station.

All content from Kiddle encyclopedia articles (including the article images and facts) can be freely used under Attribution-ShareAlike license, unless stated otherwise. Cite this article:
Johnstone Facts for Kids. Kiddle Encyclopedia.