Kids Encyclopedia Facts
This page is about the city. For the adjacent town, see Johnstown (town), New York.

Johnstown is a city and the county seat of Fulton County in the U.S. state of New York. As of the 2010 Census, the city had population of 8,743. The city was named after its founder, Sir William Johnson.

The city of Johnstown is mostly surrounded by the town of Johnstown, of which it was once a part when it was a village. Also adjacent to the city is the city of Gloversville. The two cities are together known as the "Glove Cities". They are known for their history of specialty manufacturing. Johnstown is located approximately 45 miles (72 km) west of Albany, about one-third of the way between Albany and the Finger Lakes region to the west.

Johnstown, originally "John's Town", was founded in 1762 by Sir William Johnson, a Baronet who named it after his son John Johnson. William Johnson came to the British colony of New York from Ireland in 1732. He was a trader who learned American Indian languages and culture, forming close relationships with many Native American leaders. He was appointed as the Superintendent of Indian Affairs, as well as a major general in the British forces during the French and Indian War (Seven Years' War). His alliances with the Iroquois were significant to the war.

As a reward for his services, Johnson received large tracts of land in what are now Hamilton and Fulton counties. He established Johnstown and became one of New York's most prosperous and influential citizens. He was the largest landowner in the Mohawk Valley, with an estate of more than 400,000 acres (1,600 km2) before his death. Having begun as an Indian trader, he expanded his business interests to include a sawmill and lumber business, and a flour mill that served the area. Johnson, the largest slaveholder in the county and perhaps in the state of New York, had some 60 enslaved Africans working these businesses. He also recruited many Scots-Irish tenant farmers to work his lands. Observing Johnson's successful business endeavors, the local Native American inhabitants dubbed him Warragghivagey, or "he who does much business." 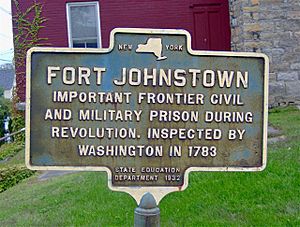 As the area initially owned and settled by Johnson grew, he convinced the governor, Lord William Tryon, to establish a new county in upstate New York west of Albany County. This new county was named Tryon, after the governor, and Johnstown was made the county seat. The county courthouse, built by William Johnson in Johnstown in 1772, partly at his own expense, still stands today, as the oldest operating courthouse in New York. Sir William Johnson died in 1774 before the American colonies declared their independence from Britain.

Although the majority of the fighting during the American Revolution raged elsewhere, Johnstown did see its share of fighting late in the war. With area residents not knowing of Cornwallis' defeat and surrender at the Battle of Yorktown in Virginia, about 1,400 soldiers fought at the Battle of Johnstown, one of the last battles of the American Revolution, on October 25, 1781. The Continental forces, led by Col. Marinus Willett of Johnstown, ultimately put the British to flight. During that time, many British Loyalists fled both Johnstown and the surrounding area for Canada, including Johnson's surviving family. Sir William Johnson's home suffered vandalism at the hands of Continental soldiers quartered there.

After the American Revolution, Johnstown became part of Montgomery County when the name of Tryon County was changed to honor the Continental General Richard Montgomery, who died at the Battle of Quebec. All of the Johnson property was forfeited to the state because of the family's Loyalist sentiments and support for the British cause. Sir William Johnson's manor house and estate were subsequently purchased by Silas Talbot, a naval officer and hero of the American Revolution.

19th century to the present

In 1803 the community of Johnstown was incorporated as a village. In 1838, Johnstown's county affiliation changed yet again when what by then remained of Mongomery County was divided into two separate counties: Montgomery and Fulton. While the village of Fonda became the new county seat of Montgomery County, Johnstown became the county seat of Fulton County. The village of Johnstown became a city in 1895, becoming separate from the surrounding town.

In 1889, shortly after the Johnstown Flood in Pennsylvania, Johnstown New York suffered a similarly devastating flood. Cayadutta Creek rampaged, Schreiber's Skin Mill was swept away, as was the State Street bridge, and over twenty people were drowned or missing when the flood carried away the Perry Street bridge.

Johnson Hall was designated a National Historic Landmark in 1960. It is operated by New York State as an historic site, with regularly scheduled special events.

Johnstown is located along the southern edge of Fulton County, in the picturesque Mohawk Valley of upstate New York. It is slightly north of the route developed for the Erie Canal through what is now Montgomery County. Although not a hilltown, Johnstown is close to the Adirondack Mountains that stretch across the northern portion of Fulton County. It is situated near the southern border of the Adirondack Park.

Cayadutta Creek which runs through the city provided water power needed to generate the electricity required by the various industries that grew up in Johnstown. The creek flows south to join the Mohawk River at Fonda.

There were 3,579 households out of which 29.5% had children under the age of 18 living with them, 44.1% were married couples living together, 13.5% had a female householder with no husband present, and 38.3% were non-families. 33.3% of all households were made up of individuals and 16.6% had someone living alone who was 65 years of age or older. The average household size was 2.30 and the average family size was 2.91.

All content from Kiddle encyclopedia articles (including the article images and facts) can be freely used under Attribution-ShareAlike license, unless stated otherwise. Cite this article:
Johnstown (city), New York Facts for Kids. Kiddle Encyclopedia.