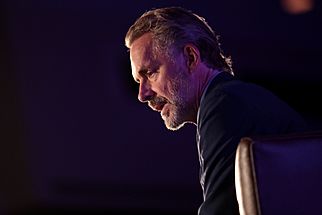 Jordan Bernt Peterson (born June 12, 1962) is a Canadian clinical psychologist and a professor of psychology at the University of Toronto. He studies abnormal, social, and personality psychology. He is interested in the psychology of religious and ideological belief.

Peterson has criticised political correctness, Marxism, and postmodernism. Peterson has said "the climate change thing for me is a contentious issue, because you can’t trust the players."

All content from Kiddle encyclopedia articles (including the article images and facts) can be freely used under Attribution-ShareAlike license, unless stated otherwise. Cite this article:
Jordan Peterson Facts for Kids. Kiddle Encyclopedia.