Joseph Bowman, born Joseph Lawrence Bowman (c. 1752 – August 14 or 15, 1779), was a frontier, Virginia state militia officer, during the American Revolutionary War. He was second-in-command, during Colonel George Rogers Clark's 1778 military expedition to capture the Illinois Country, in which Clark and his men seized the key British-controlled towns of Kaskaskia, Cahokia, and Vincennes. Following the 1779 campaign and defeat of the British forces, in Vincennes, Bowman was critically injured in an accidental gunpowder explosion and subsequently died of his wounds. He was the only American officer killed during the 1778-1779 Illinois campaign. Joseph Bowman kept a daily journal of his trek from Kaskaskia to Vincennes, which is one of the best primary source accounts of Clark's victorious campaign.

Joseph Bowman was born in Frederick County, Virginia, the son of George Bowman and Mary Hite, Anglicized from their original, German names, Hans Georg Baumann and Marie Elisabetha Hite. His maternal grandfather was Jost Hite, a German immigrant credited, as the first white, European colonist to settle west of the Blue Ridge Mountains of Virginia. In 1732, Hite led his extended family, including his daughter Mary and her husband, George Bowman, to the Shenandoah Valley, near present-day Winchester, Frederick County, Virginia. Jost Hite distributed land, that he owned, to his family and to other settlers—claims, which would later be contested in Hite v. Fairfax, a landmark Virginia land case. Joseph Bowman was born at Fort Bowman, near present-day Strasburg, Shenandoah County, Virginia.

In 1774, Joseph Bowman served in the Virginia colonial militia, during Lord Dunmore's War. Other Virginians, who served with him in the war, included George Rogers Clark and Leonard Helm. Soon after Dunmore's War, Bowman moved to Kentucky with other British colonists, who were seeking available land on the western frontier. In 1777, Joseph Bowman was living in the frontier settlement of Harrodstown, in present-day Harrodsburg, Mercer County, Kentucky. On September 11, 1777, thirty-seven men from the area gathered at Bowman's property to shell corn and were attacked by Indians. One white settler was killed and six others were wounded, before the Indians were driven off.

Joseph Bowman and three of his brothers served in the American Revolutionary War. Bowman is sometimes, confused with his brother, Colonel John Bowman, a prominent leader of the Kentucky frontier settlements, of the Virginia State Forces, during the war.

Joseph Bowman served, as a captain, during George Rogers Clark's campaign, into the Illinois Country and was present, at the capture of Fort Gage in Kaskaskia, on July 4, 1778. Captain Bowman later, moved north, leading an ununiformed, combined American, mostly Virginian and locally-born, Illinois Country, French/transplanted French Canadien force, to capture Prairie du Rocher and Cahokia Fort de Chartres and Cahokia, where Bowman remained, for a time, as the commanding officer of the renamed Fort Bowman.

When Fort Sackville, renamed Fort Patrick Henry and Captain Leonard Helm, the Virginia state militia commander, were captured by British Lt-Governor Henry "Hair Buyer" Hamilton, in late 1778, Captain Bowman marched with Colonel Clark, in February 1779, across 180 miles (290 km), to lay siege to the British forces at Vincennes. Joseph Bowman also, participated in the negotiations for their surrender. After the British surrender, the American flag was raised and the fort was renamed Fort Patrick Henry, on February 24, 1779. Within days, a dispatch from the Governor of Virginia arrived, with commissions promoting Clark to general, and Bowman to major. For his services rendered, Major Bowman was granted a total of 4,312 acres (17.45 km2) in land north of the Ohio River, known as "Clark's Grant."

In celebration, of the end, of General Clark's Illinois campaign, a six-pounder cannon was fired on February 25, 1779. During the cannon salute, some of the artillery gunpowder charges accidentally ignited, wounding Captain Edward Worthington, four privates, a captured British soldier, and critically wounding Captain Bowman. Oddly enough, General Clark made no mention of the tragic cannon accident in his memoir. However, Clark does describe Major Bowman leading soldiers, as late as June 1779. Due to the severe burn wounds he received, the health of Major Bowman deteriorated, causing him to die, at Fort Patrick Henry, on August 14, 1779. The last page of his journal is blank, except for an anonymous notation: "God save the [Virginia] commonwealth, this 15th day of August, 1779." A bronze grave marker with the date of August 18, 1779 was later, placed in the St. Francis Xavier Cemetery, adjacent to the George Rogers Clark National Historical Park, Vincennes, Knox County, Indiana, though he was buried somewhere along the Wabash River. 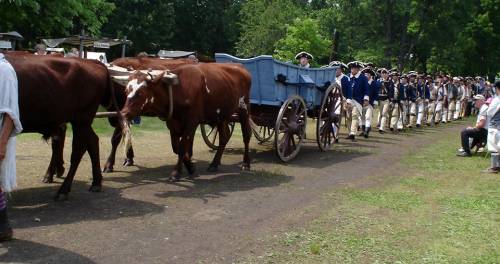 All content from Kiddle encyclopedia articles (including the article images and facts) can be freely used under Attribution-ShareAlike license, unless stated otherwise. Cite this article:
Joseph Bowman Facts for Kids. Kiddle Encyclopedia.