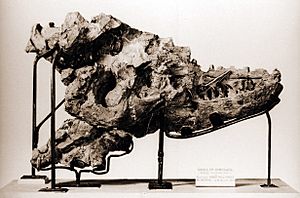 The holotype specimen of Albertosaurus discovered by Tyrrell

Joseph Burr Tyrrell, FRSC (November 1, 1858 – August 26, 1957) was a Canadian geologist, cartographer, and mining consultant. He discovered dinosaur (Albertosaurus sarcophagus) bones in Alberta's Badlands and coal around Drumheller in 1884. Canada's Royal Tyrrell Museum of Palaeontology in Alberta was named in his honor.

Tyrrell was born in Weston, Ontario, the third child of William and Elizabeth Tyrrell. He was a student at Weston Grammar School before graduating from Upper Canada College in 1876 and receiving a law degree from the University of Toronto in 1880. After articling for a law firm in Toronto, his doctor advised him to work outdoors due to his health.

He joined the Geological Survey of Canada in 1880, leading or participating in numerous explorations. He led the 1893 and 1894 expeditions into the Northern Barren Lands, down the Dubawnt River, the first visit to the Kivalliq Region Barrenlands by a European since the explorations of Samuel Hearne in the 1770s. His younger brother, James Williams Tyrrell, accompanied Tyrrell on the expedition, which included the first European contact with the Ihalmiut, an Inuit people from the interior of what is today Nunavut.

Tyrrell married Mary Edith Carey in 1894 and they had three children, Mary (1896), George (1900), and Thomas (1906). Mary Edith was the founder and first president in 1921 of the Women's Association of the Mining Industry of Canada. In 1894, Tyrrell stumbled upon biographical recollections (11 books of field notes, 39 journals, maps, and a narrative) of Canadian overland explorer, cartographer, and fur trader David Thompson and, in 1916, published them as David Thompson's Narrative.

Tyrrell went into the gold-mining business in 1898, a career that would last more than 50 years.

He was the mine manager of the Kirkland Lake Gold Mine in northern Ontario for many years starting in 1926.

Tyrrell retired to northeast Scarborough on the Rouge River, where he established substantial apple orchards and an interest in grafting and breeding. The expanded orchards, later managed by his son George, are now the site of the Toronto Zoo. He died in Toronto in 1957 at the age of 98. 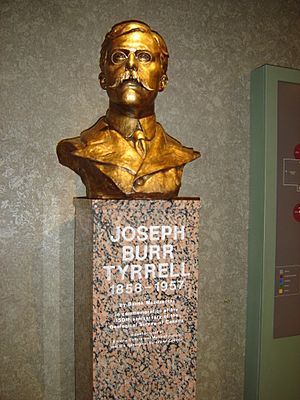 Bust of Tyrrell at the Royal Tyrrell Museum of Paleontology

All content from Kiddle encyclopedia articles (including the article images and facts) can be freely used under Attribution-ShareAlike license, unless stated otherwise. Cite this article:
Joseph Tyrrell Facts for Kids. Kiddle Encyclopedia.