Juliusz Słowacki (23 August 1809 – 3 April 1849) was a Polish Romantic poet. He is considered one of the "Three Bards" of Polish literature — a major figure in the Polish Romantic period, and the father of modern Polish drama. His works often feature elements of Slavic pagan traditions, Polish history, mysticism and orientalism. 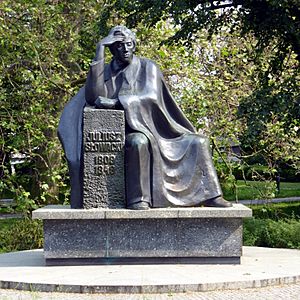 Słowacki died in Paris on 3 April 1849 from tuberculosis, and on 5 April he was buried in the Montmartre Cemetery in Paris. He never married. Only about 30 people attended his funeral. Krasiński, although no longer close to Słowacki in the last few years, wrote of the funeral:

Słowacki's tombstone at Montmartre was designed by his friend and executor of his last will, painter Charles Pétiniaud-Dubos; it did not weather the passage of time well however, and in 1851 a new, similar tombstone was put in place, this one designed by Polish sculptor Władysław Oleszczyński. In 1927 Słowacki's remains were moved to Wawel Cathedral in Poland, but an empty grave still remains at Montmartre. 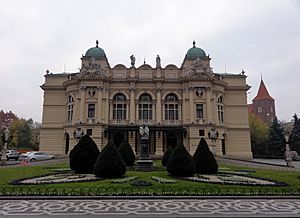 After his death, Słowacki gained a cult-like status in Poland; in particular, in the cultural center of Kraków. Several obituaries and longer articles appeared in the Polish press upon Słowacki's death. His works, many of them published posthumously for the first time, found growing acceptance among a new generation, Słowacki took the fancy of the Polish youth. He was its singer, its spiritual leader in the full meaning of the term. Though a poet of the romantic era, he was increasingly popular among the positivists and the authors of the Young Poland period in the late 1800s and early 1900s. 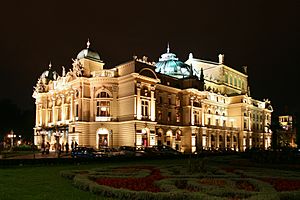 Several streets and schools in modern Poland bear Juliusz Słowacki's name. Three parks are dedicated to him: in Bielsko-Biała, in Łódź and in Wrocław. There are several monuments of Juliusz Słowacki, including ones in Warsaw and Wrocław.

Among the most notable landmarks bearing his name is the Juliusz Słowacki Theatre in Kraków, and the Juliusz Slowacki Museum in Kremenets, Ukraine which opened in 2004 at his family's former manor house. In 2009 the Polish Sejm (parliament) declared that year, the two-hundredth anniversary of Słowacki's birth, to be the Year of Juliusz Słowacki.

All content from Kiddle encyclopedia articles (including the article images and facts) can be freely used under Attribution-ShareAlike license, unless stated otherwise. Cite this article:
Juliusz Słowacki Facts for Kids. Kiddle Encyclopedia.