Jurupa Valley (Serrano: Hurumpa) is a city in the northwest corner of Riverside County, California. It was the location of one of the earliest non-native settlements in the county, Rancho Jurupa. The Rancho was initially an outpost of the Mission San Gabriel Arcángel, then a Mexican land grant in 1838. The name is derived from a Native American village that existed in the area prior to the arrival of Europeans.

The city of Jurupa Valley covers approximately 43.5 square miles (113 km2), and had a population of 105,053 as of the 2020 census. It is bordered by the cities of Eastvale, Norco, and Riverside in Riverside County and the cities of Ontario, Fontana, Rialto, and Colton in neighboring San Bernardino County.

It is north and west of the Santa Ana River, south of the Riverside-San Bernardino County line, and east of Interstate 15. It includes the neighborhoods of Mira Loma, Glen Avon, Sky Country, Indian Hills, Pedley, Rubidoux, Belltown, Jurupa, Jurupa Hills, and Sunnyslope. Residents of the area had previously voted on incorporation in 1992; however, voters rejected it as well as a competing ballot measure that would have incorporated Mira Loma.

Jurupa valley as seen from the Jurupa Hills, 2015

The major freeways in Jurupa Valley are Interstate 15, which serves as the city's western border, and California State Route 60, which runs along the northern side of the city. 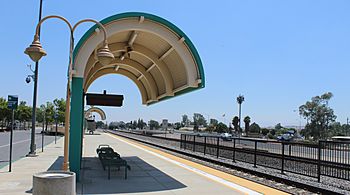 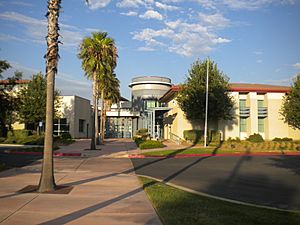 Jurupa Valley as seen from the Jurupa Hills, 2015

All content from Kiddle encyclopedia articles (including the article images and facts) can be freely used under Attribution-ShareAlike license, unless stated otherwise. Cite this article:
Jurupa Valley, California Facts for Kids. Kiddle Encyclopedia.