Kalbar is a small town and locality in the Scenic Rim, South East Queensland, Australia. It is located near the Cunningham Highway and directly north of Mount French in the Fassifern Valley. The town is part of the Scenic Rim Region local government area. At the 2011 census, Kalbar had a population of 723. 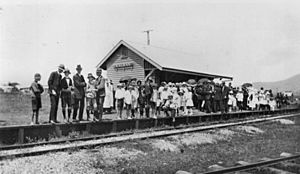 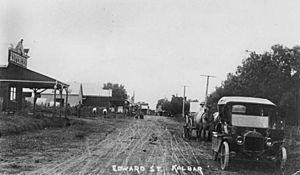 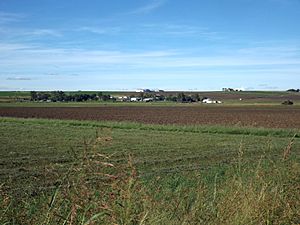 Settlement began at the location in 1876 and by 1890 a small town had developed. The town was once known as Fassifern Scrub and then Engelsburg after the first settler of the town. The town has a very rich German history, reflected today in the many Anglo-German road and street names as well as the many local German settler descendant surnames. The name changed to Kalbar because of anti-German sentiment in 1916. The Mount Edwards railway line reached the town in the same year.

Engelsburg Post Office opened on 7 July 1897 (a receiving office had been open from 1878. known as Engels for five years) and was renamed Kalbar in 1916.

During the 1899 referendum to decide if Australia should become a federation, Kalbar registered the highest No vote of any town in Queensland. In 1920, the Kalbar School of Arts hall and half the businesses in town were destroyed by fire.

From 1961 to 1990, Kalbar held a large annual celebration, the Fassifern Potato Festival. The event included a street parade with motorised floats culminating at the show grounds and continuation of festivities. Some artifacts from the festival can be found at the Templin Historical Museum. Harvest Festivals organised by the local Salvation Army church extended back to the 1920s. The annual agricultural show is held in June. 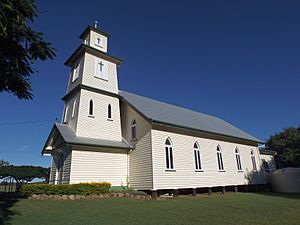 Kalbar has a number of heritage-listed sites, including:

All content from Kiddle encyclopedia articles (including the article images and facts) can be freely used under Attribution-ShareAlike license, unless stated otherwise. Cite this article:
Kalbar, Queensland Facts for Kids. Kiddle Encyclopedia.