Kula is a district of Maui, Hawaii, that stretches across the "up-country", the western-facing slopes of Haleakalā, from Makawao to Ulupalakua. Most of the residential areas lie between about 500 to 1,100 m (1,600 to 3,600 ft) in elevation. The district has traditionally been where full-time residents prefer to live, as distinct from the generally hotter and busier, more tourism-oriented towns near sea level, such as Kihei and Lahaina. The population of the census-designated place (CDP) at the 2010 Census was 6,452. 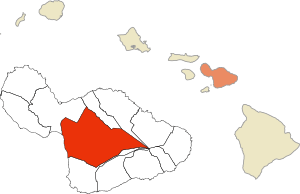 The ancient district of Kula.

The word Kula means "open meadows" in the Hawaiian language. On Maui Kula is one of the island's 12 foundation districts of ancient Hawaii called moku. Generally, Kula is a zone of arid earth with open country slopes between the inhabited and productive shoreline areas and the densely forested zone higher on the mountain.

Maui's Kula district is the island's largest district, extending from dry coastal areas to the wetter high pasture lands of three major ranches (Haleakala, Erewhon, and Ulupalakua) that cap the region about halfway up the slopes of Haleakala. It laterally extends from Keokea to near Makawao where the rainforest of East Maui once began.

In leeward areas, away from the prevailing moist tradewinds—called the rain shadow of Haleakala—the lower portion of Maui consists of a broad, arid expanse where little cultivation of the earth is possible. This zone consists of dry, desert-like open range just inland from the sea in artificially irrigated Kihei, and is covered with kiawe trees to an elevation of about 1,000 feet on the volcano's slopes.

Between this zone and the upper reaches of the hillsides, especially up steep Waipoli and Poli Poli Roads, broad, are open areas for vegetable and fruit crops. The moderate climate often yields as many as three or four harvests per year.

When the territorial legislature first set up the political design in 1906, they decreed only two levels of government: state and county. Consequently, Hawaii's towns do not have specific boundaries or "city limits." There are also no official district boundaries for Maui County elections.

The twisty Haleakala Highway, from its junction with Kula Highway in Pukalani, loosely defines the northern edge of Upper Kula. The upper road (Kekaulike Avenue), also known as State Highway 377, leads up through usually green pastures, silver eucalyptus tree groves (and Blue Jacaranda trees in late spring), contrasting to the sugarcane below. Where the road beyond Kula Lodge makes an abrupt upward tack to Haleakala National Park, the area known as Upper Kula surrounds Kekaulike Avenue. In less than five miles it descends the slope to rejoin the Kula Highway near Rice Park and heads south to Keokea.

New homes dot the area, taking advantage of the moderate weather and bi-coastal views of the isthmus below.

In Keokea, the Kula Hospital sits on the hillside above the road. Originally a tuberculosis treatment sanatorium built in 1909, Kula Hospital now serves the community as a critical access hospital.

The southern edge of Kula had a once-flourishing Chinese community that numbered over 700 immigrant workers and farmers. While the area is now more mixed, Keokea is still home to a pair of Chinese family-owned stores and a service station as well as a boutique coffee-shop.

A mile or so beyond Keokea is the county park dedicated to Maui's former resident, Sun Yat-sen, called the "father of modern China." He grew up in the area in the late 19th century living with his uncle. He led the revolution that ended China’s last dynasty and established the Republic of China in 1912.

Just as upcountry residents visit the seashore, residents near the shore sometimes visit Upper Kula to enjoy cooler temperatures that may require a fireplace in winter. A popular saying is "It's cooler in Kula".

Lower Kula lies between about 1,200 and 2,800 feet of elevation along the western flank of Haleakalā, the dormant volcano that dominates the island's landscape and is the foundation of Kula’s backdrop.

Communities along the old Lower Kula Road with names like Pulehu, Waiakoa, Omaopio and Keokea each have unique history of ethnic settlement. In the late 19th century, Portuguese and Chinese immigrants, who fulfilled labor contracts with the sugarcane plantations, moved to this area. Later, Japanese farmers moved into the area for its fertile earth.

These farmers have been producing vegetables ever since. In fact, during the California gold rush the farmers in Kula shipped so many potatoes that it was nicknamed "Nu Kaleponi," a Hawaiian pronunciation of "New California."

That farming tradition continues today, even among the gentlemen farmers and their farms that have sprung up in the past two decades. Kula grows its well-known onions, lettuce, potatoes, jicama, tomatoes, carrots, cauliflower and cabbage. It is also a major source of cut flowers for the state. Most of Hawaii's proteas, as well as nearly all the carnations used in leis, come from Kula.

Lower Kula encompasses the areas around Lower Kula Road, the old county road that once spanned the region before Kula Highway was finished in 1964. The old meandering road crosses the straight modern highway several times between Pukalani and Keokea.

Even after nearly 50 years, there are few businesses along the highway, while the old road has the usual establishments that serve rural communities, including historic churches. Holy Ghost Catholic Church has a unique octagonal shape and hand-carved altar. Its turret is a landmark on the slopes of Haleakala, visible from much of Central Maui below. It was constructed in 1894 by Portuguese immigrants.

In the past decade, the lush views and cooler climate of Lower Kula have drawn a new type of resident. Agricultural lands are carved up for "gentleman estates" with large homes. Clusters of homes around old Lower Kula Road are becoming denser.

The major limit on the further development in the whole Kula area is the significant lack of water. This basic resource is key to the sustainability of the area. The Upcountry Community Plan gives highest priority to the water supply of agriculture and the Hawaiian Homelands project.

There are many micro-climates created by the combined effects of elevation, rain shadow, and land contour. Much of the west slopes of East Maui are dry or semi-desert due to a rain shadow effect: the prevailing trade-winds are from the north-east and east and Kula is in the "shadow" of these winds. At the higher elevations and at night, especially in winter, temperatures dip into the 40's or high 30's. Frosts are virtually unknown except at much higher elevations (7,000 ft or 2,100 m) on Haleakala.

There is a distinctive weather feature known as the "Maui vortex". A wind vortex forms as the trade-winds pass around the north-west corner of Haleakala (over Pukalani) and blow southward down the central valley of Maui over Maalaea Bay and then circle back up-slope over Kihei bringing a "lei of clouds" late most mornings over Kula. Around sunset, the downward breezes from the summit wipe out these clouds.

Kula has a strong agricultural and ranching tradition, the latter on the lands above the residential areas. Indeed, there is frequent reference in Makawao (which means "edge of the forest") to a paniolo (cowboy) ambiance that derives from this ranching activity.

The Maui onion mostly grows at the lower levels of Kula (below Highway 37). It is also known for its persimmons that ripen during the fall; many are located in the Pulehuiki area. Other produce grown in Kula includes lettuce, cabbage, and herbs. Kula is also known for the many varieties of protea grown for commercial sale.

Hawaii Department of Education operates public schools. Kula Elementary School is in Kula. Its September 1964 opening stemmed from a combination of Kealahou, Keokea, and Makena, and Ulupalakua schools. Kalama Intermediate School is the area intermediate school.

All content from Kiddle encyclopedia articles (including the article images and facts) can be freely used under Attribution-ShareAlike license, unless stated otherwise. Cite this article:
Kula, Hawaii Facts for Kids. Kiddle Encyclopedia.