Lenzburg is a municipality in the district of Lenzburg in the canton of Aargau, Switzerland. It is the capital city of the district. The town was founded in the Middle Ages. It is in the Seetal valley, about 3 kilometres (1.9 mi) south of the Aare delta. Lenzburg and the municipalities of Niederlenz and Staufen have merged over time. The city name refers to the name of the castle which can be translated as spring castle.

As of 31 December 2010, Lenzburg about 8,341 people lived in Lenzburg. Lenzburg is about 30 kilometres (18.6 mi) west of Zürich. Many people living in Lenzburg go to Zürich to work.

The area has a long history. A neolithic cemetery with 16 chambered tombs built about 3,800 years ago was found near the castle in 1959. 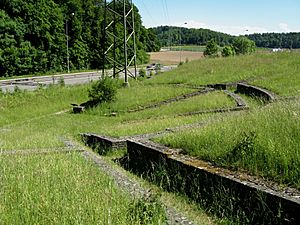 The Roman theatre at Lenzburg

A Roman theatre was uncovered when the motorway was built in 1964. It was built about 100 AD. It could seat an audience of about 4,000 people. It was part of a small village of 400 to 600 people that existed for about 200 years. The village was built on either side of the road for a distance of about 400 metres. There were shops, taverns, and small factories making wood and leather products. Behind these building were houses and farms. It is possible that there was a small fort in the village. The first buildings were wooden but these were destroyed in a fire at the end of the first century. The new buildings were made of stone. The village was abandoned in the 3rd century.

Castle Lenzburg as seen from the south

In the 5th and 6th centuries, an Alamanni village existed. The oldest registered usage of the name Lencis (from which Lenzburg derives) is from 893. In 1036, Castle Lenzburg became the seat for the count of Lenzburg, then an important lord. The family died out in 1173, and the castle was then owned by emperor Frederick Barbarossa. After this, it was mainly used by the Kyburger house. The Habsburgs took over the castle in 1273.

City rights were granted in 1306. Lenzburg was conquered by Bern in 1415, along with the western part of what is now Aargau. Bern did not take away its city rights. In 1433, the city of Bern bought the castle and used it to govern the area from 1444 to 1798. A major fire ruined the town in 1491. Only fifteen houses were not destroyed. The reformation was carried out at the same time with the rest of the region in 1528. The economy started to move slowly from a farming economy to a more industrial one in the 16th century. A textile factory was founded in 1732.

In 1886, the German playwright, Frank Wedekind lived in the castle which his father had bought. It was sold in 1892 to August Edward Jessup from Philadelphia who spent a lot of money restoring the castle. He sold it to a Chicago banker, James W. Ellsworth in 1911. Ellsworth's son, Lincoln Ellsworth and Roald Amundsen used the castle to plan their polar explorations in the 1920s. 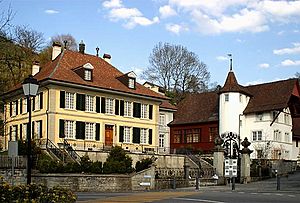 The main place to see in the town is the Lenzburg castle. It was built in the 11th century and has been added onto several times. Lenzburg is among the oldest and most important high-castles in Switzerland. Some of the city wall has been kept and is now under protection. Some interesting buildings are in the old part of town. These include:

Lenzburg is an important economic centre. It contains over 800 companies. Most of the businesses are small to medium sized, but some worldwide companies are established in Lenzburg, for example the global Asea Brown Boveri (ABB). About 6,000 people work in Lenzburg. 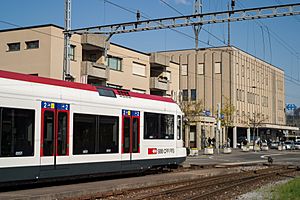 Lenzburg is a good place for transportation. It is about 25 kilometres (15.5 mi) from Zürich with access to the A1, Switzerland's most important motorway. Two main axes of traffic cross in Lenzburg, one running from Waldshut to Lucerne and the other running from Zurich to Berne.

Some of the trains from Zurich to Berne stop in Lenzburg. Lenzburg is part of the Suburban rail system of Zurich. Other trains connect the city to Brugg, Lucerne, Zofingen and Zug. The line to Wettingen was closed, because of low traffic. The trains were replaced by a commuter line from Zurich (which runs to Aarau).

Zürich International Airport is close to the town of Lenzburg. The local bus Regionalbus Lenzburg leads to the municipalities of Brunegg, Dintikon, Möriken-Wildegg, Schafisheim and Seengen. Lenzburg has an urban bus system as well. 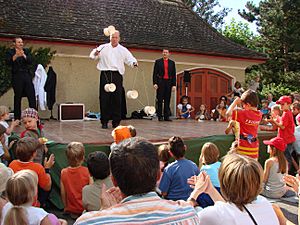 All content from Kiddle encyclopedia articles (including the article images and facts) can be freely used under Attribution-ShareAlike license, unless stated otherwise. Cite this article:
Lenzburg Facts for Kids. Kiddle Encyclopedia.