The Logan Creek Dredge rises southeastern Cedar County at the confluence of Middle Logan Creek and Perrin Creek, northeast of Laurel. It then flows southeast, passing through or adjacent to the towns of Concord, Wakefield, Pender, Bancroft, Lyons, Oakland, Uehling and Winside. The canal empties into the Elkhorn River in eastern Dodge County, just east of Winslow.

The original Logan Creek was named after Logan Fontenelle, a chief of the Omaha tribe, who was killed by Oglala Sioux in 1855. 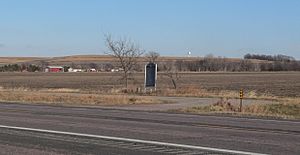 Logan Creek Site is located at Marker 151 on U.S. Route 77, between Uehling and Oakland in Burt County. It is managed by the Nebraska State Historical Society and was entered on the National Register of Historic Places.

The Aaron Arlington family was in 1857 the first to settle near the present Oakland, which was named after John Oak in 1863.

All content from Kiddle encyclopedia articles (including the article images and facts) can be freely used under Attribution-ShareAlike license, unless stated otherwise. Cite this article:
Logan Creek Dredge Facts for Kids. Kiddle Encyclopedia.