Louis of France (Louis Ferdinand; 4 September 1729 – 20 December 1765) was the only surviving son of King Louis XV of France and his wife, Marie Leszczyńska. He was the Dauphin of France all his life. He was the father of three kings of France, Louis XVI, Louis XVIII and Charles X. 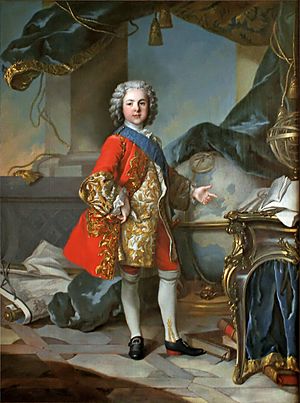 Louis was born at the Palace of Versailles. As the heir apparent to the throne of France, he was given the traditional title of Dauphin of France.

Louis' governess was Madame de Ventadour. From an early age Louis took a great interest in the military arts. He was very close to his three oldest sisters.

In 1744 Louis XV negotiated a marriage between his fifteen year old son and the nineteen year old Infanta Maria Teresa Rafaela of Spain, daughter of King Philip V of Spain and Elisabeth Farnese. The marriage contract was signed 13 December 1744 and the marriage was celebrated by proxy at Madrid 18 December 1744 and in person at Versailles 23 February 1745. Louis and Maria Teresa Rafaela were well matched and had a real affection for each other. They had one daughter Princess Marie Thérèse who died before reaching adulthood and killed her mother.

On 10 January 1747 Louis was married by proxy at Dresden to Maria Josepha of Saxony, the fifteen year old younger daughter of Frederick Augustus II, Prince-Elector of Saxony and King of Poland and his wife, Archduchess Maria Josepha of Austria. A second marriage ceremony took place in person at Versailles on 9 February 1747.

Louis died of consumption at Fontainebleau in 1765 at the age of thirty-six. Louis was buried in the Cathedral of Saint-Étienne in Sens his heart being buried at the Royal Basilica of Saint Denis.

All content from Kiddle encyclopedia articles (including the article images and facts) can be freely used under Attribution-ShareAlike license, unless stated otherwise. Cite this article:
Louis, Dauphin of France (1729–1765) Facts for Kids. Kiddle Encyclopedia.