Mýa Marie Harrison (born October 10, 1979) is an American singer, songwriter, dancer and actress. She first became famous in 1998 with her debut album Mýa. She is best known for the 2001 cover of the famous R&B song "Lady Marmalade".

"The turning point was when I saw Savion Glover in 'Tap'. I watched the videotape and studied steps on the kitchen floor."—Mýa,The Washington Post

Mýa is a native of Washington, D.C. She is one of three children. Her father, Sherman, was an African-American musician and singer. He played in several bands near where they lived. Her Italian-American mother, Theresa, worked as an accountant. As a child, Mýa would pretend she was Michael Jackson and would sing into a wooden spoon and pretended it was a microphone.

Mýa sometimes was bullied because of her ethnic background. She would say

There was a time in my life when I wasn't popular and accepted by kids in school. I was made fun of with braces and kinky hair, and being from a multicultural family, etcetera... And it really hurts when you're that age, but later when you get something of your own or you get involved in activities like a sport, you begin to be accepted for what you do, and your personality and who you are, instead of your clothes and how you look and the name designer brands you have on. 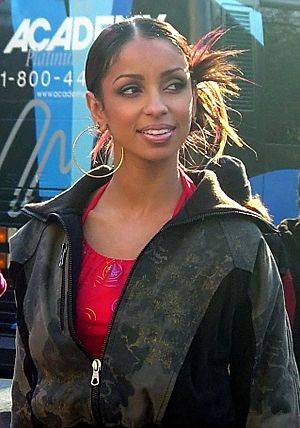 All content from Kiddle encyclopedia articles (including the article images and facts) can be freely used under Attribution-ShareAlike license, unless stated otherwise. Cite this article:
Mýa Facts for Kids. Kiddle Encyclopedia.