The city is named after the nearby Malad River, the name being French for "sickly". Malad City is located along Interstate 15 on the east side of the Malad Valley 13 miles (21 km) from the Utah/Idaho border. 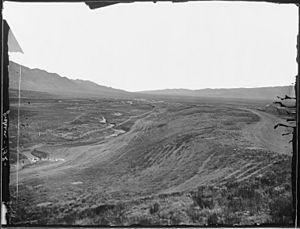 Established in 1864, Malad is one of the oldest communities in the state of Idaho. The community received its name from Donald Mackenzie, a Scottish-Canadian trapper, who passed through the valley between 1818 and 1821 with a party of trappers. Some of his men became sick while camped here and, believing that the illness was caused by drinking water from the valley's principal stream, he named it "Malade" meaning sick or bad in the French language. Actually, the water had nothing to do with the men's illness, as it was later learned by the second party led by Jim Bridger between 1832 and 1835. The men had most likely eaten some beaver that fed on the poisonous roots of "Water Hemlock" trees that put a naturally occurring "cicutoxin" into the animals' flesh. The beaver would have likely been immune to the poison because of long-term adaptation, but the trappers suffered from their feast. Native tribes avoided this outcome by altering food preparation methods to include boiling, which apparently deactivated the poison.

Malad began largely as a Welsh Mormon settlement whose settlers brought their Welsh traditions with them. In addition to the Mormon majority, some of the leading families in the community belonged to either the Presbyterian Church or the Reorganized Church of Jesus Christ of Latter Day Saints. These two denominations each built a place of worship in the town. Some of the minutes from early town meetings were taken down in both English and Welsh. The city is very proud of its Welsh heritage. Malad lays claim to having more people of Welsh descent per capita than anywhere outside Wales. Malad celebrated its Welsh heritage by holding an annual “eisteddfod”, patterned after the music and poetry contests held in Wales for over 900 years. The eisteddfod was an all-day event with people coming from all over southeastern Idaho. The event featured music, songs and storytelling of Wales. The custom continued until 1916 and the outbreak of World War I. With the goal of renewing the old eisteddfod tradition in Malad, in 2004, the annual Malad Valley Welsh Festival was established.

In the summer of 1843 John C. Fremont and his party of 39 men passed the spot where Malad City now stands.

Mormon prophet Brigham Young came through the Malad Valley in 1855. In 1856, at his request, Utahn members of The Church of Jesus Christ of Latter-day Saints migrated to the region. This party of 15 families led by Ezra Barnard traveled to the Malad Valley and established a community by the name of Fort Stuart. The following year in 1857, Fort Stuart was renamed Malad City. A post office was later set up in 1865.

By 1886 Malad City was the fastest growing village in eastern Idaho. The city was an important commercial center between Salt Lake and Butte, Montana. In 1906, the railroad reached Malad City, allowing travel to Salt Lake City in only a four-hour ride by rail. The population of the city would double over the next 15 years as a result. Malad City experienced a flood when the earthen Deep Creek Dam, northeast of the city, broke June 19, 1910.

A magnitude 6.1 earthquake shook the Pocatello Valley near the Idaho-Utah border March 27, 1975. The epicenter was only 15 miles (24 km) southwest of Malad City which was hit hardest by the quake. Nearly ⅔ of its homes and businesses had some sort of damage.

Malad City received national news coverage when a corporate jet carrying eight people including four Coca-Cola executives crashed January 15, 1996 killing all on board. The large twin-engine turbo-prop was flying from Salt Lake City, Utah to Pocatello, Idaho for a Coca- Cola sales meeting. The Mitsubishi MU-2 aircraft crashed and burned at the base of a canyon 8 miles (13 km) northwest of Malad. According to the National Transportation Safety Board in its published SEA96MA043 Accident Report, the cause of the accident was listed as ice on the wings.

Towards the end of 2003, a nationwide influenza outbreak occurred. Malad was likely the hardest hit community in the nation. So many people became ill during the first part of December, 2003 that the city was virtually shut down. The entire school district in Malad was closed for three days in an effort to keep students from spreading the ailment. Roughly a third of the students became ill. Church services and Christmas festivities were also cancelled.

Malad City has the oldest department store in the state of Idaho. Evans Co-op opened in 1865 and is still in business today. Malad City also has the longest running weekly newspaper in Idaho, called "The Idaho Enterprise" which published its first issue on June 6, 1879.

Because of its proximity to Utah, which has no state lottery, Malad has become a major retail site for the Idaho Lottery. The Top Stop Gasoline and Convenience store in Malad is responsible for 3 percent of Idaho's lottery sales, and the town as a whole accounts for over 19 percent of state sales. Only Boise, the state's largest city, has higher lotto sales. Over the 22-year history of the Idaho Lottery, it is estimated that Utahns have provided $54.1 million in lottery profits, which Idaho then uses for its own capital works and school funding.

The Wasatch fault runs along the east side of Malad Valley, and there are several active faults in the area to the south and west.

There were 786 households of which 34.7% had children under the age of 18 living with them, 58.7% were married couples living together, 8.0% had a female householder with no husband present, 3.6% had a male householder with no wife present, and 29.8% were non-families. 27.4% of all households were made up of individuals and 14.1% had someone living alone who was 65 years of age or older. The average household size was 2.60 and the average family size was 3.21.

There were 797 households out of which 34.3% had children under the age of 18 living with them, 61.5% were married couples living together, 6.3% had a female householder with no husband present, and 29.5% were non-families. 27.9% of all households were made up of individuals and 16.8% had someone living alone who was 65 years of age or older. The average household size was 2.65 and the average family size was 3.24.

Oneida County Pioneer Museum – The building was constructed in 1914 by R.B. Davis and used as a drug store and for other business purposes until becoming home to the museum in 1992. The original safe and the original pressed-tin ceiling are still in good condition and are notable features of the museum.

The short film Peluca, the work of Jared Hess and the precursor film to the hit Napoleon Dynamite, mentions Malad. The antagonist, Seth, is played by Jon Heder and tells his friends that he has an FFA competition in "Ma-lawd" the following morning. Peluca and Napoleon Dynamite were both filmed in neighboring Franklin County, Idaho and reference much of the surrounding area in their film.

All content from Kiddle encyclopedia articles (including the article images and facts) can be freely used under Attribution-ShareAlike license, unless stated otherwise. Cite this article:
Malad City, Idaho Facts for Kids. Kiddle Encyclopedia.