The city attracts a large number of tourists, including many international visitors. The city centre foreshore is home to a variety of wildlife including dolphins, pelicans, shags, and an abundance of marine life including the blue manna crab which has become synonymous with the area. The city is also known for its protected waterways, beaches and boating and fishing activities.

Mandurah has grown from isolated holiday communities along the shores of the Peel-Harvey Estuary to a major regional city in just over a decade, in a similar vein to the Gold Coast in Eastern Australia. In recent times, it has formed a conurbation with Perth along the coast; it is only 18 km south of Rockingham, a southern suburb of Perth.

Mandurah has also become a popular lifestyle alternative for Perth retirees and its connection with the Perth CBD has been strengthened with the opening of the Perth-Mandurah railway line in December 2007 and a direct road connection to the Kwinana Freeway built by late 2010. A housing affordability survey of 227 cities in 2008 ranked it the least affordable city in Australia.

The waters of the Peel Inlet and Harvey Estuary (one of Australia's larger inlet systems) form the centre of Mandurah. The estuary is approximately twice the size of Sydney Harbour. The city lies in and around this freshwater system which in turn feeds into the Indian Ocean. The city and its suburbs have many kilometres of ocean coastline most of which is sandy beaches. Mandurah also has a number of suburbs built around artificially created canal systems that extend from the Peel Inlet, such as Halls Head, Dudley Park and Wannanup.

In terms of geology, much of Mandurah lies on the dune systems which dominate South Western WA's coastline, progressively grading towards the Swan Coastal Plain as one travels inland. The area has infertile soils due to the dunes being rather sandy, having poor water retention qualities. Limestone outcrops are found to the north of the city especially along the Mandurah Line. Mandurah is the closest city to Yalgorup National Park which is home to modern thrombolites as well as an array of flora and fauna.

Mandurah is located in the Swan Coastal Plain ecoregion. The ecoregion contains an array of vegetation, from coastal dune and sandplains to banksia and eucalypt woodlands. Mandurah is covered by shoreline and dune deposits from the Pleistocene and Holocene that overlie Paleozoic and Neogene deposits of the Perth Basin. Coastal dunes feature scrub-heath communities, though banksia low woodlands occur on the soils of coastal dunes. Progressing inland give way to eucalypt woodlands.

Seasonal wetlands (dry in the summer and wet in winter) are the most diverse habitat in the Swan Coastal Plain, which Mandurah has several wetland regions around the Peel Inlet. The wetlands feature several osprey nests, spoonbill and darters. Other fauna includes galah, short-billed black cockatoo, long-billed black cockatoo, and Australian ringneck among others. Australian ringnecks face competition for nesting space from rainbow lorikeet, an introduced species in Western Australia, that has now spread to Mandurah. Despite attempts to eradicate rainbow lorikeets, the population has grown to the point that they can no longer be eradicated.

Mandurah is typically considered a marginal area for both major parties at both state and federal politics. Northern Mandurah lies in the safe Labor seat of Brand, held by Gary Gray, while southern and central Mandurah lies in the more marginal Canning, held by the Liberal Party's Andrew Hastie. State politics also highlight a significant divide, with northern and central Mandurah located in the safe Labor seat of Mandurah held by David Templeman, while southern Mandurah located in the safe Liberal seat of Dawesville, held by Deputy Premier Kim Hames.

Mandurah also receives a moderate though highly seasonal rainfall of about 850 mm a year, however recent trends have seen this once reliable rainfall drop significantly. In addition, most of the winter rains are usually accompanied by severe winds and storms capable of causing widespread damage, making Mandurah one of the windiest cities in Australia. These conditions are perfect for tornado formation, which Mandurah's climate is remarkable for producing one of the highest densities of tornadoes in the world.

Summer storms are rare due to the Mediterranean climate in the city, but not unheard of. Mandurah was affected to a lesser degree than Perth in the 2010 Western Australian storms, but the 2011-12 summer was notable for Mandurah bearing the brunt of three severe thunderstorms. One such storm on 12 December 2011 gave Mandurah almost seven times its monthly average (69.4 mm compared to an average of 15.5 mm), which was eclipsed exactly one year later on 12 December 2012 (74.2 mm). Another storm on 20 January 2012 dumped 57 mm on the city causing power outages and flash flooding. One man and numerous buildings in the city were struck by lightning during the storm, which produced 2,300 strikes within 30 kilometres of the city, which was more than what neighbouring Perth receives in an entire year and comparable to the most severe electrical storms for which places in the tropics like Darwin are known. 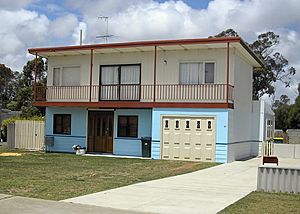 Example of an older-style coastal home at Mandurah

The Noongar (or Bibbulmun) people, who inhabited the southwest of Western Australia, named the area Mandjar ("meeting place"). After European settlement the name changed, possibly due to mispronunciation, to Mandurah.

In December 1829, Thomas Peel arrived in Western Australia from the United Kingdom with workmen, equipment and stores on the ship Gilmore. He had financed the trip in exchange for a grant of land in the Swan River Colony. A term of the grant was that he arrive no later than 1 November 1829, thus his original land grant was forfeited. Undaunted, Peel built a small settlement named Clarence south of the Swan River Colony at what is known today as Woodman Point. Facing many problems with the settlement and his own ill-health, Peel led the remaining Clarence settlers to the area known today as Mandurah. Thomas Peel died in 1865 but Mandurah continued to grow, albeit very slowly, over the years leading to the 20th century. 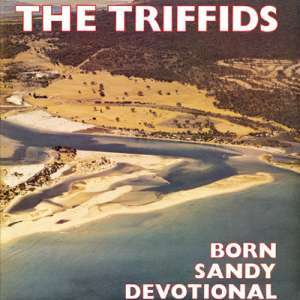 Industrial development at Kwinana(1955), a mining boom in nearby Jarrahdale (1963) and Wagerup (1984), with the associated industrial boom in Pinjarra (1963), combined with an idyllic lifestyle by the coast, saw Mandurah grow rapidly, and on 1 July 1987 it was upgraded to the Town of Mandurah. Three years later, on 14 April 1990, Mandurah became the fifth non-metropolitan settlement in Western Australia to become a city. 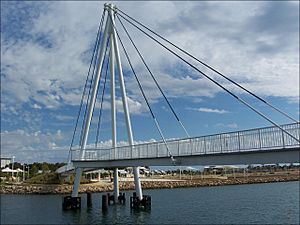 Highway 1 bisects the city of Mandurah as Mandurah Road towards Fremantle and Old Coast Road towards Bunbury. Meanwhile, Pinjarra and Gordon/Lakes Roads serve as major east-west corridors for the northern part of the city. The Kwinana Freeway and Forrest Highway also provides a rural bypass for the city. Mandjoogoordap Drive (formerly the Mandurah Entrance Road) also provides a direct link from the Kwinana Freeway.

The Mandurah Estuary Bridge was constructed in 1985 to 1986, and was the first incrementally launched box girder bridge in Australia. The Dawesville Channel (also known as the Dawesville Cut), a large man-made channel, was opened in April 1994. The channel was created to allow saline seawater from the Indian Ocean to flush into the Peel Inlet to reduce the incidence of algal blooms which had plagued the estuary for many years.

Public transport in Mandurah is covered by Transperth due to its proximity to Perth itself, with eleven bus routes servicing the city while the Mandurah railway line, opened in December 2007, links Mandurah to Perth via Mandurah railway station with a travel time of approximately 50 minutes. Mandurah is also a stop on Transwa bus services between Perth and the South West.

Mandurah is at the centre of a water recycling project known as the Halls Head Indirect Water Reuse Project. Based in Mandurah, it has been awarded the Western Australian Water Corporation Award for Water Treatment and Recycling in 2009. An aquifer is used to filter the area's sewage water providing safe, quality irrigation water for local parks, gardens and ovals. Mandurah is also linked to Perth's water supply.

A photograph of Mandurah adorns the cover of the 1986 album Born Sandy Devotional by The Triffids.

Mandurah was featured in the 1986 film Windrider, starring Nicole Kidman.

All content from Kiddle encyclopedia articles (including the article images and facts) can be freely used under Attribution-ShareAlike license, unless stated otherwise. Cite this article:
Mandurah Facts for Kids. Kiddle Encyclopedia.