Marmarth ( MAR-məth) is the largest city in Slope County in the U.S. State of North Dakota with a population of 143 as of 2014. It is situated in the southwestern part of Slope County, along the Bowman County line in the southwestern part of North Dakota, just seven miles east of the Montana border. Marmarth was founded as a railroad town along the Milwaukee Road from Seattle, WA to Chicago, IL. By 1920, Marmarth had over 1,300 residents. The town's population declined during most of the 20th century and was only 143 in 2014. There is one restaurant and one bar still located in Marmarth in 2013.

The town is recognized for various historical events, including Native-American Lakota history, the discovery of the Dakota fossil and various other dinosaur skeletons, the attack on James L. Fisk by Sitting Bull, and several visits by former president Theodore Roosevelt. Roosevelt visited Marmarth on several occasions and killed both his first buffalo and his first grizzly bear by the Little Missouri River in Marmarth. The old ranch house on Hay Creek in which Roosevelt stayed during his visits is still standing. Another visited attraction in town is the “Woman in Stone”, which is a 50-foot rock depicting the face and hairline of a woman.

The town is located 50 air miles and nearly 100 road miles from Theodore Roosevelt National Park. Marmarth is adjacent to the Little Missouri National Grassland, and is also the closest city to Big Gumbo, a 20,000 acre federally owned public wilderness area administrated by the Bureau of Land Management.

Several movies and TV shows have been filmed in the Theodore Roosevelt National Park, including the Wooly Boys, History Hogs and The Indomitable Teddy Roosevelt, all which were filmed in neighboring Billings County. 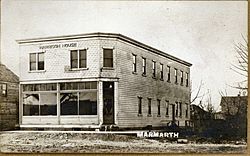 The Harrison House in Marmarth, 1915.

The name comes from a combination of letters in the first and middle names of Margaret Martha Finch, granddaughter of Albert J. Earling, president of the railroad at the time. It is nicknamed the “city of trees”, as a result of being one of few forested areas in the Badlands region of Southern North Dakota.

It is located between Bucklin township and Hughes township in the badlands region of North Dakota. It is situated adjacent to the Little Missouri River at the confluence of Little Missouri River, Hay Creek, and Little Beaver Creek. It has an elevation of 2,709 feet and is nicknamed “the city of trees” for being an oasis of trees in the treeless Badlands region, and is the only place in the State of North Dakota where limber pines grow.

According to the Köppen Climate Classification system, Marmarth has a semi-arid climate, abbreviated "BSk" on climate maps. 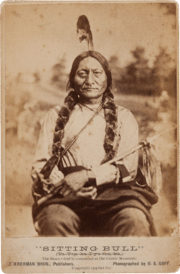 Sitting Bull was shot under an attack on Union Army officer James L. Fisk in September 1864.

The area was originally inhabited by the Lakota- and Crow peoples, which may have been part of the 9th-12th centuries BCE Mound Builders civilization.

On September 2, 1864, Captain James L. Fisk of the Union Army was leading 200 gold-seekers in eighty-eight wagons from North Dakota to Montana. By the Deep Creek, approximately twelve miles east of today’s Marmarth, the group was attacked by over a hundred Hunkpapa Sioux Indians led by the chief Sitting Bull. Sitting Bull was wounded, but saved by Jumping Bull and White Bull, while six Hunkpapas, ten soldiers, and two civilians were killed in the battle. The Site of Fort Dilts has been listed on the National Register of Historic Places since 1980.

Theodore Roosevelt was frequently in Marmarth and it is credited as the place where the future president shot his first grizzly bear and also his first buffalo. The old squat ranch house by Hay Creek where the president guested is still standing.

Marmarth was a hugely popular place for homesteading during the late 19th and early 20th centuries, and was founded in the fall of 1907 as a result of the new Milwaukee Road transcontinental rail line known as the Pacific Extension, as well as other factors such as agriculture, and cheap land. The town was originally laid out on the east side of the Little Missouri River, near where a post office known as Neva and a hotel had already been established. However, due to problems with securing additional land on the east side of the river for a reasonable price, the city was moved to the opposite side in 1908. Later, many pioneers came here as a result of the Dust Bowl and in search of a new life in the American Midwest. Marmarth grew quickly to serve the hundreds of homesteaders who flooded into the area. Because the first two decades of the 20th century were unusually wet, the new settlers reaped harvests of wheat on a scale "that promised to turn even owners of modest farms into wealthy men." By 1920, Marmarth had 1,318 inhabitants. An auditorium, a theater, a large train station, a newspaper, and paved sidewalks were all established during this time. 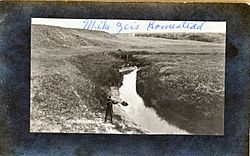 The population here once reached 1,300 in the early 20th century, but is now at 140. The town was the largest town on the Milwaukee railroad line in North Dakota by 1911, and was also the fifth largest town west of the Missouri River. Another one of the first pioneers, Michael Zeis (born 1885) of Holdingford, Minnesota described the town: “I also started one main cigar shop, made cigars all by hand in my spare time and sold them at Bowman, Rhame”. Zeis lived in the town from 1908 to 1918, working for the Chicago, Milwaukee, St. Paul and Pacific Railroad, but left the town when he was drafted for World War I in 1918. The town had its own doctor, pioneer Dr. Frederick A. Bordwell and the town soon opened its own Opera House, Barber Building, the Mystic Theatre in 1914, a car dealership and Canadian Frank Gibbs’ hardware store. The town was also known to jail the notorious Jesse James’ gang, consisting of the Old West outlaws Cole, Bob, and Jim. Gibbs later wrote about the town: “There were two banks, the post office, two hotels, a jewelry store, a gas station, a hospital, the train station, a meat store, a theatre, a car dealership, a laundry, and a hardware store”. By the 1920s, a combination of the end of the agricultural boom occasioned by World War I and a return to more normal (i.e., drier) climatic conditions drove many of the settlers from their farms. At the 1930 census, the town's population had declined nearly 50% from a decade earlier. This population decline has continued every census thereafter, with the number of residents in 2010 nearly 10% of the number recorded in 1920. 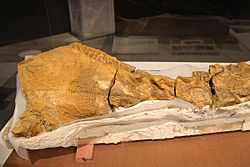 A segment of the Dakota fossil, bones from a 67-million-year-old dinosaur discovered in Marmarth in 1999.

Marmarth is the location of numerous dinosaur fossil findings, including the Dakota fossil. The Marmarth Historical Society and the Marmarth Research Foundation offer summer courses on archeological areas where triceratops and hadrosaurs have been excavated, including courses on fossil preparation, field techniques, dinosaur fossil preservation, and more. Dakota, a fossilized Edmontosaurus, a type of duckbill dinosaur, was discovered near Marmarth in 1999 by Tyler Lyson. The fossil is unique in that soft tissue, skin, and muscle were fossilized as well as bone.

There were 64 households, of which 25.0% had children under the age of 18 living with them, 46.9% were married couples living together, 4.7% had a female householder with no husband present, 3.1% had a male householder with no wife present, and 45.3% were non-families. 43.8% of all households were made up of individuals, and 20.3% had someone living alone who was 65 years of age or older. The average household size was 2.13 and the average family size was 2.91. 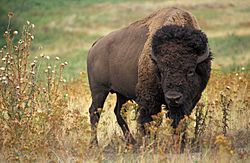 As a result of being located within the Theodore Roosevelt National Park, wildlife such as the American bison is plentiful and a protected species. 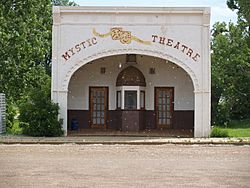 The Mystic Theatre has been on the U.S. National Register of Historic Places since 1977.

All content from Kiddle encyclopedia articles (including the article images and facts) can be freely used under Attribution-ShareAlike license, unless stated otherwise. Cite this article:
Marmarth, North Dakota Facts for Kids. Kiddle Encyclopedia.