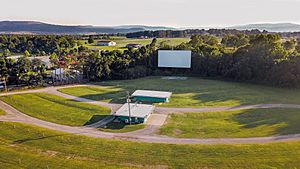 Marshall is the largest city in and county seat of Searcy County. It is located in the Ozarks at the foot of the Boston Mountain Range 10.5 mi (16.9 km) south of America's first National River, the Buffalo National River. Marshall serves as a hub for area tourism including camping, floating, hiking, bicycling and Dark Sky viewing.

According to the United States Census Bureau, the city has a total area of 2.6 square miles (6.7 km2), all of it land.

There were 594 households, out of which 24.7% had children under the age of 18 living with them, 46.0% were married couples living together, 11.4% had a female householder with no husband present, and 40.2% were non-families. 39.1% of all households were made up of individuals, and 23.6% had someone living alone who was 65 years of age or older. The average household size was 2.12 and the average family size was 2.81.

Smith Barn along US Highway 65 north of Marshall

The community was named for John Marshall, chief justice of the U.S. Supreme Court. Although Marshall was mostly destroyed during the Civil War, it grew during the nineteenth century. The Missouri and North Arkansas Railroad sped the growth of the town during the early twentieth century. However, the post-World War I slump hit the area economies hard, causing an effect well known to other parts of the country.

The climate in this area is characterized by hot, humid summers and generally mild to cool winters. According to the Köppen Climate Classification system, Marshall has a humid subtropical climate, abbreviated "Cfa" on climate maps.

In 2021 the Marshall economy is a diverse mixture of retail, general services, and some manufacturing. Located on US Highway 65 and near the Tyler Bend Visitor Center for the Buffalo National River, the city serves a large volume of traffic for travel and tourism. Marshall is a tourism trail hub with support services for a variety of trail activities including bicycling, motorcycles, ATV, horseback riding and hiking. 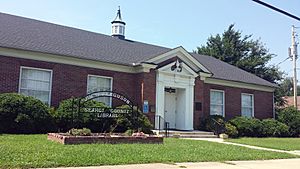 In 1866 a tuition-based school opened in Marshall. The Arkansas Legislature established the Marshall School District in 1909. On July 1, 2004, the Marshall district and the Leslie School District consolidated to form the Searcy County School District. Originally a PreK-6 school serving all elementary grades for Marshall, Marshall Elementary School was reconfigured in 2012 as a K-4 serving the entire school district, then as K-3 in 2014. In 2012 Leslie Elementary School in Leslie was reconfigured as Leslie Intermediate School, an upper elementary school serving the whole district. In the 2019 rankings of U.S. News & World Report, Marshall High School was recognized as a bronze medal recipient. Marshall High School has also been designated as a School of Innovation.

The Jim G. Ferguson Searcy County Library was completed in 1961 through the efforts of Jim Ferguson, George Kendall and the citizens of the community. Mr. Ferguson was quoted as saying “Kids here are no different than kids anywhere else; all they need is an opportunity.” This Library offers a total of 8,524 sq. feet of resources with a 60,000 book & materials collection. Public computers are available for research, job searches etc., and Wi-Fi is available. The Genealogy Dept. is an LDS Affiliate Library with 5,000+ historical pictures of people and places as well as 2,400 historical records. There are also books, maps and microfilm available for research. There is a Genealogy Facebook page that has reached almost 23,000 people. In 2016, the Ferguson Foundation assisted the Library with creating “Hattie House” next door to the Library. This Youth Center provides free access to nutrition, supervised games, crafts, music and tutoring. The Library received the 2011 Arkansas Star Library Award. 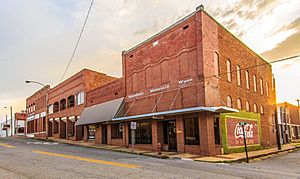 Sunrise on the town square.

All content from Kiddle encyclopedia articles (including the article images and facts) can be freely used under Attribution-ShareAlike license, unless stated otherwise. Cite this article:
Marshall, Arkansas Facts for Kids. Kiddle Encyclopedia.