A megaflood is a flood which suddenly releases a huge amount of water. In geomorphology it is sometimes called an outburst flood. At the end of the last ice age, many large floods were caused by the collapse of ice sheets or glaciers which formed the dams of glacial lakes.

Examples of older outburst floods are known from the geological past of the Earth. Landslides, lahars, and volcanic dams can block rivers and create lakes. When the rock or earth barrier collapses, or is eroded, this triggers a flood. Lakes also form behind glacial moraines, which can collapse and create outburst floods. 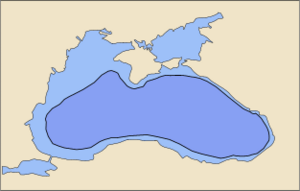 It is claimed that a rising sea flood led to refilling of the freshwater glacial Black Sea with water from the Aegean. It is described as "a violent rush of salt water into a depressed fresh-water lake in a single catastrophe that has been the inspiration for the flood mythology".

The marine incursion was caused by the rising level of the Mediterranean about 7,600 years ago. It is the subject of debate among geologists. The existence of the flood is not certain, and the theory that it was the basis for later flood myths is not proven.

A theory proposed by Andrey Tchepalyga of the Russian Academy of Sciences dates the flooding of the Black Sea basin to an earlier time and from a different cause. According to Tchepalyga, global warming beginning from about 16,000 years ago caused the melting of the Scandinavian ice sheet. This caused a massive river discharge which flowed into the Caspian Sea. The Caspian basin could not contain all the floodwater, which flowed into the ancient Black Sea basin. This would have flooded large areas that were previously settled or used for hunting. Tchepalyga suggests this may have formed the basis for legends of the great Deluge.

Originally there was an isthmus across the Strait of Dover. During an earlier glacial maximum, the exit from the North Sea was blocked to the north by an ice dam, and the water flowing out of rivers backed up into a vast lake on the bed of what is now the North Sea. A gently upfolding chalk ridge linked the Weald of Kent and Artois, perhaps some 30 metres (100 feet) higher than the current sea level.

Refilling the Mediterranean (5.3 million years ago)

A catastrophic flood refilled the Mediterranean Sea 5.3 million years ago. The flood occurred when Atlantic waters found their way through the Strait of Gibraltar into the Mediterranean basin, which was then a salt lake and salt bed.

In North America during glacial maximum, there were no Great Lakes as we know them. but "proglacial" (ice-frontage) lakes formed and shifted. The most famous of these proglacial lakes was Lake Agassiz. Melting ice caused a series of great floods from Lake Agassiz. Massive amounts of freshwater was added to the world's oceans.

The last of the North American proglacial lakes, north of the present Great Lakes, reached its largest volume around 8,500 years ago, when joined with Lake Agassiz. But its outlet was blocked by the great wall of the glaciers and it drained by tributaries into the Ottawa and St. Lawrence Rivers far to the south. About 8,300 to 7,700 years ago, the ice-dam failed catastrophically. Lake Ojibway's beach terraces show that it was 250 metres (820 ft) above sea level. The volume of Lake Ojibway is estimated to have been about 163,000 cubic kilometres, more than enough water to cover a flattened-out Antarctica with a sheet of water 10 metres (33 ft) deep. That volume was added to the world's oceans in a matter of months.

The detailed timing and rates of change after the onset of melting of the great ice-sheets are subjects of continuing study.

Overflow of lakes formed by landslides

A landslide dam on Sichuan's Dadu River burst and caused a flood on 10 June 1786. The flood extended 1400 km downstream and killed 100,000 people. This was one of the worst landslide-related disasters in history.

All content from Kiddle encyclopedia articles (including the article images and facts) can be freely used under Attribution-ShareAlike license, unless stated otherwise. Cite this article:
Megaflood Facts for Kids. Kiddle Encyclopedia.