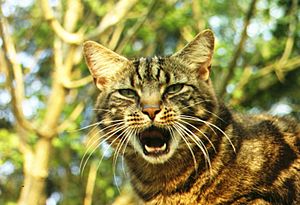 A meow or miaow is a noise made by cats. There are different types of meows, such as ones that mean the same thing as "hello," ones that ask for food, or ones that let people know when they are annoyed, among other things.

The meow is used by kittens to their mother. It is a plea for attention, and experts think pet cats use it because they often need owners to do things for them. Adult cats do not meow to other cats.

Different languages have different ways of spelling "meow." For example, English has been using the meow spelling since 1842 and before that, it used the miaow, miau, or meaw spellings. Spanish and German still use the miau spelling while French uses the miaou spelling.

All content from Kiddle encyclopedia articles (including the article images and facts) can be freely used under Attribution-ShareAlike license, unless stated otherwise. Cite this article:
Meow Facts for Kids. Kiddle Encyclopedia.