Michelago is a locality in the Monaro region of New South Wales, Australia. The locality is in the Snowy Monaro Regional Council local government area, 54 kilometres (34 mi) south of Canberra on the Monaro Highway. It was founded in the 1820s, on the main route from Sydney to the Snowy Mountains. In the 2006 census, Michelago had a population of 795.

Michelago is situated in a valley between two mountain ranges, the Tinderry Range to the East and the Clear Range to the west. A road crosses the Tinderrys from Michelago, leading ultimately to the 1950s silver mining settlement Captains Flat. The highest peaks in the picturesque Tinderry Range reach approximately 1600m above sea level, while Michelago itself has an elevation of around 800m. The Murrumbidgee River separates the village from the Clear Range. The Michelago Creek passes through the village, and is a source of water for the residents. Its catchment area is in the Tinderry Range, and after passing the town the creek flows into the Murrumbidgee River. It has been claimed that Michelago represents the territorial divide between white-backed and black-backed magpies on the Monaro Highway from Canberra to Cooma. 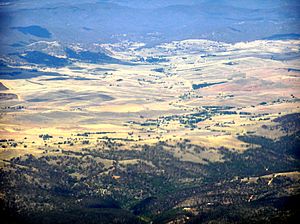 Currie and Ovens explored the Michelago region in 1823 and the first settlement proceeded soon thereafter, involving the ex-convict couple, Emmanuel and Catherine Elliot. The explorer Dr John Lhotsky claimed that his journey in 1834 south from the Limestone Plains toward Michelago represented a descent into what he considered barbarism: no church south of Sutton Forest, no window pane south of Canberra, no white woman south of Michelago. The first Monaro Superintendent of Police, the Corsican Francis Nicholas Rossi, built an ironbark slab homestead in the region called Micilago on 35,000 acres (14,175 hectares) in 1837; this station was bought in 1859 by Alexander Ryrie who married Charlotte Faunce the daughter of Alured Tasker Faunce the police magistrate at Queanbeyan; one of their children being Granville Ryrie, later a General in World War I, knighted and involved with the League of Nations in Geneva. Alexander Ryrie who'd renamed his property Michalago,built St Thomas' church in the village of Michelago and life for those in the area was very self-sufficient, with income from wool, cattle for meat, milk and butter, locally grown fruit and vegetables, with soap and tallow candles also being made by hand.

A big social event was the picnic races and over 200 people attended the Michelago Public School picnic in 1906. During the 1930-50's eucalyptus stilling was a profitable occupation in the Tinderry Range above Michelago and a drum of eucalyptus oil (44 gallons or 200L) was worth 100 pounds on site in the 1940s. Notable families of the early years of Michelago include the Cotters, Kellys, Lawlers, McTernans and Poveys. Many of their descendants still live in the region.

Lea-Scarlett notes that in October 1840 a gang of five bushrangers broke out of the lockup at Queanbeyan and police magistrate Captain Faunce had to give chase to Michelago before he recaptured them. On 1 June 1866 a bushranging gang consisting of the Clarke brothers, Patsy Connell and two accomplices held up Michelago town (which then consisted of Thomas Kennedy's Hibernian Hotel, a police station and lockup, Abraham Levy's store, a Church of England schoolhouse, a Catholic church and a few houses) and drank its entire liquor supply before staggering off to their rocky hide-out called 'Beefcask' in the Tinderrys.

Michelago in art, poetry and film 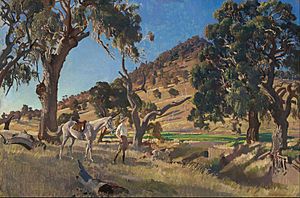 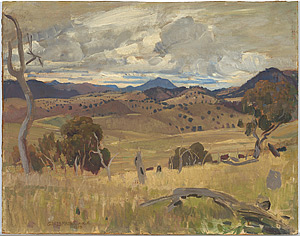 The George Washington Lambert painting The Squatter's Daughter was painted at Michelago. Lambert also painted Michelago Landscape (both paintings are in the National Gallery of Australia collection) and wrote this poem about it:

"The sun is down and 'Micalago' is at rest
Like Chinese silk of faded gold, the grass and all the hills like breasts of turtle-doves
My soul could find a home 'midst blades of grass
And get its music from the whispering trees
These pleasant little hills that lure us on
To ride and ride until we reach beyond."

David Campbell (poet) wrote a poem The Squatter's Daughter about the funerals of Granville Ryrie and his daughter at Michelago:

"Veterans shed tears and limped the sweet-briar miles
Behind his guncarriage to Michelago
And now The Squatter's Daughter follows him:
The grey lake blurs beneath
Governor's Hill, her candid spirit mourned
By grandchildren with hair of daffodil."

The artist Robert Pengilley lives and paints in the Michelago region.

The 1999 film Passion, about the life of Percy Grainger was partly filmed in Michelago. The 2004 Cate Shortland film Somersault included scenes filmed at the Ryrie homestead at Michelago; scenes from the Gillian Armstrong 1979 film My Brilliant Career were also shot at that location.

There was a big bushfire in the Tinderry Range in November 1957 which burnt out 90% of the reserve and was not contained until 24 December. In January 2003, bushfires ravaged the Canberra region and, spreading from Namadgi National Park, devastated much of the flora and bush landscape around Michelago, particularly down from the Clearview Road toward the Murrumbidgee River. While the village itself was not affected by the fires, several farms and houses were destroyed and mountains of the Clear Range were left blackened and barren. A bushfire which began on 17 December 2009 devastated the area east of Michelago, burning out over 9,000 hectares and destroying three homes and a sawmill.

All content from Kiddle encyclopedia articles (including the article images and facts) can be freely used under Attribution-ShareAlike license, unless stated otherwise. Cite this article:
Michelago Facts for Kids. Kiddle Encyclopedia.