Middlesex is a town in Washington County, Vermont, United States. The population was 1,731 at the 2010 U.S. Census.

The town of Middlesex was granted by royal charter on June 8, 1763, by New Hampshire colonial governor Benning Wentworth. The town takes its boundaries from Waterbury, incorporated the previous day, and Worcester, which received its grant the same day as Middlesex. The source of the town's name is uncertain but it is supposed Wentworth, or a staff member, chose the name for its location between Waterbury and Worcester. Another possibility would be that Wentworth chose Middlesex to seek favor from English nobleman Charles Sackville who held the title Lord Middlesex until 1765, when he became Duke of Dorset.

The town remained largely undeveloped through the period of the Vermont Republic and early Vermont statehood, with settlements in the village and Putnamville. The Putnam family were among the first settlers of the town. Seth Putnam was elected first town clerk in 1790; brothers Isaac and Jacob Putnam were elected town surveyors.

Middlesex village, situated along the Winooski River, is the town's chief settlement and location of the town hall. Middlesex Village obtained a post office in 1821 (that office closed in 1966). Middlesex Center is, as the name suggests, in the near center of the town situated northwest of the Great Brook and Brook Road. Shady Rill is rolling, mostly lowland where three brooks-Herrick, Martins, and Patterson, each named for a local family, converge with the North Branch which runs south to Wrightsville and Montpelier. A northern affiliation Baptist church was built in Shady Rill in 1849. The village of Putnamville is located along the town's eastern border along the North Branch River. A waterfall there once powered grist and saw mills. A post office was opened in Putnamville, incongruously titled Putnamsville, in 1882 (this post office closed in 1935).

Wrightsville, just south of Putnamville, was once a sizable settlement with nearly 30 built structures, and several mills. The Wrightsville Dam, built by the Civilian Conservation Corps 1933-35 in response to the 1927 flood, caused that settlement to be disbanded. The Northbranch Cemetery was moved southwest to Portal Road, and a majority of the mostly Greek Revival houses were moved west up the hill to where the old Hood place presently stands. Off Portal Road and Bolduc Road is Tangletown Road, which takes its name from an area of town nicknamed Tangletown because the woods there are so thick and so alike that settlers reported getting "tangled up" (lost) in the area.

The town had a large bear population well into the late nineteenth century. A recorded story tells of a farmer located between Middlesex Center and Bear Swamp finding one of his sheep killed by a bear. The farmer and his wife immediately walked their property to take stock of their flock. The farmer spotted a bear and killed it, soon afterward his wife called out that she sighted one and he shot that one, the couple returned to the barnyard and spotted a third bear-this one eating another of their sheep, and the farmer shot that bear as well. The area received the nickname Beartown.

Through most of the nineteenth century and well into the mid-twentieth century, the primary economic activity was farming. Dairy farming, sheep herding (for wool), logging, orchards and maple sugaring have all been part of the town's economy. Following the end of World War II, the town slowly transitioned to becoming a place to live for people who worked elsewhere, mostly in Montpelier.

There were 663 households, out of which 37.1% had children under the age of 18 living with them, 60.0% were couples living together and joined in either marriage or civil union, 9.0% had a female householder with no husband present, and 26.7% were non-families. 19.5% of all households were made up of individuals, and 5.3% had someone living alone who was 65 years of age or older. The average household size was 2.61 and the average family size was 2.96. 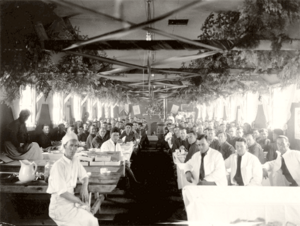 All content from Kiddle encyclopedia articles (including the article images and facts) can be freely used under Attribution-ShareAlike license, unless stated otherwise. Cite this article:
Middlesex, Vermont Facts for Kids. Kiddle Encyclopedia.