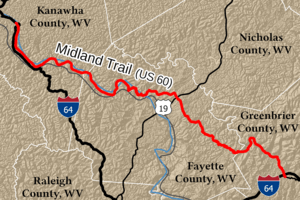 Route of the Midland Trail 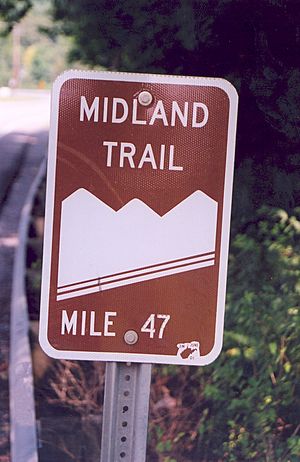 A sign for Midland Trail marks the path in Ansted, West Virginia

The Midland Trail is a National Scenic Byway which carries U.S. Route 60 (US 60) through a portion of the southern part of the U.S. state of West Virginia between Charleston and Sam Black Church. It was part of the longer transcontinental Midland Trail.

In this area, the Midland Trail follows the route of the historic James River and Kanawha Turnpike, an early road linking canals in the James River in Virginia with the navigable portion of the Kanawha River in West Virginia.

The Midland Trail crosses some of the most rugged terrain of the Mountain State. The trail extends for approximately 100 miles (160 km) from White Sulphur Springs in the east to Charleston in the west. The trail is believed to have been originally carved into the mountains by buffalo and native peoples. In 1790, George Washington ordered the trail cleared. The trail came to be traveled by stage coaches and soldiers in the Civil War.

Prior to 1988, the Midland Trail was heavily traveled, particularly by commercial vehicles, including large trucks transporting coal and timber. Traffic was significantly reduced in 1988 when the final section of Interstate 64 (I-64) was completed. The last section of I-64 (which does not closely parallel US 60 in this area) cost about $300 million to build, making it one of the most costly sections in the entire U.S. Interstate Highway System.

Although considerably shorter than the Interstate Highway routing via the West Virginia Turnpike, these days, the Midland Trail serves mostly local traffic and shunpikers seeking a bucolic interlude. It passes through both the Kanawha River Valley and the plateau high above. Notable communities and sites along this portion of the Midland Trail of nearby include:

Due to the mountain switchbacks and long, steep grades, drivers of recreational vehicles and inexperienced drivers are advised to use extra caution, particularly during inclement weather conditions.

All content from Kiddle encyclopedia articles (including the article images and facts) can be freely used under Attribution-ShareAlike license, unless stated otherwise. Cite this article:
Midland Trail (West Virginia) Facts for Kids. Kiddle Encyclopedia.