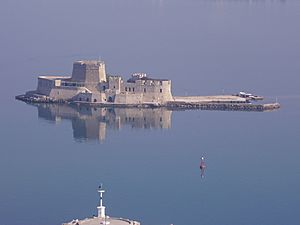 Nauplion is a Greek city. It is in the Argolida's prefecture, in the east of Peloponnese peninsula. Near Nauplio is the historical city of Argos. Nauplio was the first capital of Greece. Nauplio is a coastal city. It has three castles. The most famous are the Palamidi castle, and Bourtzi castle which is on the islet in front of the port. The population of Nauplion is 13,124 inhabitants.

Nauplion was the second capital of Greece. In 1834 the king Otto carried the capital to Athens. Nauplion was one of the first cities which were liberated during Greek War of Independence. 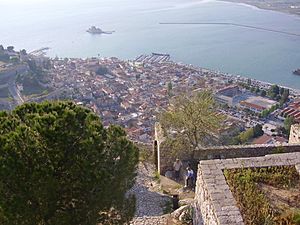 Nauplion has many sites of interest. The most interest sites are its three castle. Its old neighborhoods are also very beautiful places for visit. In Nauplion there are many old beautiful buildings from previous century.

All content from Kiddle encyclopedia articles (including the article images and facts) can be freely used under Attribution-ShareAlike license, unless stated otherwise. Cite this article:
Nauplion Facts for Kids. Kiddle Encyclopedia.