Kids Encyclopedia Facts
For the village in Wiltshire near Corsham town, see Corsham.

Neston is a small residential town and civil parish in the unitary authority of Cheshire West and Chester. It is situated on the part of the Wirral Peninsula that remains in the ceremonial county of Cheshire, England. Parkgate is located to the north west and the villages of Little Neston and Ness to the south of the town. At the 2001 Census the population of Neston ward was recorded as 3,521, increasing to 4,329 at the 2011 Census. The town and civil parish also includes Little Neston; Parkgate; and Riverside wards; along with part of Burton and Ness ward, and has a population of 15,162, increasing to 15,221 in the 2011 Census.

The name is of Viking origin, deriving from the Old Norse Nes-tún, meaning 'farmstead at/near the promontory'. Another Nesttun town can be found near Bergen, Norway. It is also mentioned in the Domesday Book as Nestone under the ownership of a William Fitznigel.

A Royal Charter was granted to Neston in 1728 in support of its status as a market town.

Historically, the current town was known as Great Neston, in order to be distinct from the smaller nearby hamlet of Little Neston. Before the rise of Birkenhead in the 1820s, it was the largest town in the Wirral Hundred. Great Neston included the hamlets of Clayhill, Hinderton, Moorside and part of Parkgate. The population of Great Neston was 1,486 in 1801 and 1,524 in 1851. In 1894, both Great Neston and Little Neston were combined to create Neston-cum-Parkgate and by 1901, the population had risen to 2,201.

Neston was a major port before the River Dee silted up. The port was then shifted further downstream to the nearby town of Parkgate, although by early nineteenth century, most traffic had ultimately transferred to Liverpool.

Neston is also a former mining town, with a colliery located at the nearby hamlet of Denhall. Opened in 1760 by Sir John Stanley, the coal mine consisted of numerous shafts, some of which were dug out underneath the river. Due to the silting up of the River Dee, coal shipments to Ireland and North Wales ended. Alternative custom was secured from the railways, brought about by the building of a link to the recently constructed Chester & Birkenhead Railway's branch to Parkgate.

The Wirral Colliery at Neston was taken over by the British government during the First World War. The pit subsequently returned to private ownership after the war, but increasing competition from larger mines precipitated in its closure in 1928.

Suburban localities of Neston are:

The A540 road links Neston to Heswall and West Kirby to the north, and Cheshire, Chester and North Wales to the south. Neston is also close to the M53 and M56 motorways, giving it access to Liverpool, Manchester, and the larger M6 motorway. 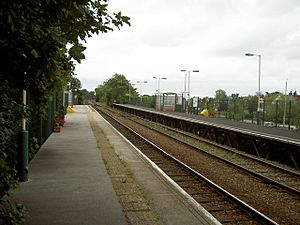 Neston railway station is situated on the Borderlands Line, providing direct services southbound to Flintshire and Wrexham, and northbound to Bidston in Birkenhead, with connecting services to the Merseyrail network. Recently, Merseytravel have been investigating the possibility of linking up the Bidston - Wrexham line to the electrified Merseyrail system.

One of the main local attractions is Ness Botanic Gardens, opened in 1898 and administered by the University of Liverpool.

On the first Thursday of June, Neston annually celebrates Ladies (Club) Day. This is a unique marching day that has links to the Neston Female Friendly Society during the Napoleonic War.

Recently, Neston has undergone an assessment to attract more income and tourists, in the form of the Neston Market Town Initiative (NMTI). The project also included the launch of a new town website. The NMTI involved improving the 'look' of the town centre (which included new shop fronts) and controversial plans regarding a new supermarket on the site of Brook Street car park. Work for the new supermarket began in March 2009 with a full archaeological dig being carried out on the car park site before construction work began. Work to excavate the site began in August 2009, a total of 28,000 cubic meters of earth was removed to allow for the construction of a multi story car park. The new Sainsbury's store was opened on 1 December 2010.

On 31 March 2008 the Market Town Initiative project was officially completed. The community regeneration work will be continued by a new local community association, ch64inc, and by the establishment of a Town Council in 2009.

All content from Kiddle encyclopedia articles (including the article images and facts) can be freely used under Attribution-ShareAlike license, unless stated otherwise. Cite this article:
Neston Facts for Kids. Kiddle Encyclopedia.