The Stringipoidea is a small superfamily of New Zealand parrots. It only has three genera: Nestor, the Kakapo Strigops and the fossil Nelepsittacus.

The genus Nestor consists of the Kea, and the Kaka, while the genus Strigops contains the iconic Kākāpō. All living species are endemic to New Zealand. The modern common species names, Kea, Kākā and Kākāpō, are the same as the original Māori names.

The nearby island species, the Norfolk Kaka and the Chatham Kaka, became extinct in recent times. The extinct species of the genus Nelepsittacus have been extinct for 16 million years. All living forms are threatened. Human activity caused the two extinctions and the decline of the other three species. Settlers introduced invasive species, such as pigs and possums, which eat the eggs of ground nesting birds. Also hunting for food, killing as agricultural pests, habitat loss, and introduced wasps have added to the problem.

Very little is known about the Chatham kaka. The genus Nelepsittacus consists of three described and one undescribed species recovered from early Miocene deposits in Otago. 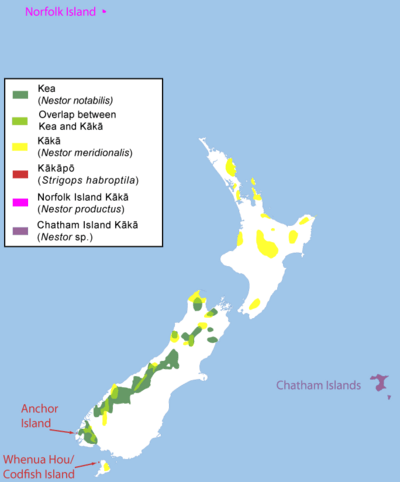 All common names for species in this family are the same as the traditional Māori names. The Māori word kākā derives from the ancient Proto-Polynesian word meaning parrot. Kākāpō is a logical extension of that name, as pō means night, resulting in kākā of the night or night parrot, reflecting the species' nocturnal behaviour. (In modern orthography of the Māori language, the long versions of the vowels a and o are written with macrons; i.e., ā and ō.) The etymology of kea in Māori is less clear; it might be onomatopoeic of its call kee-aah.

All content from Kiddle encyclopedia articles (including the article images and facts) can be freely used under Attribution-ShareAlike license, unless stated otherwise. Cite this article:
New Zealand parrot Facts for Kids. Kiddle Encyclopedia.