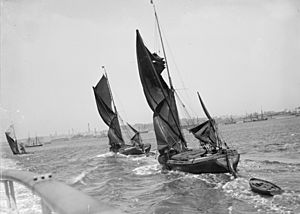 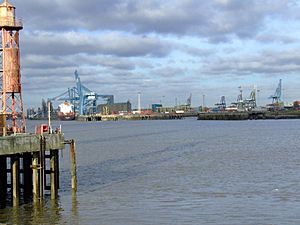 Looking up Northfleet Hope from The Shore.

Its name is derived from being situated on the northern reach of what was once called the River Fleet (today known as the Ebbsfleet). There is a village at the other end of the river named Southfleet. It has been the site of a settlement on the shore of the River Thames adjacent to Gravesend since Roman times. It was known as Fleote by the Saxons c. 600 AD, Flyote c. 900 AD, and Flete c. 1000 AD. It was recorded as Norfluet in the Domesday Book, and Northflet in 1201. By 1610 the name of Northfleet had become established. A battle took place during the civil war at the Stonebridge over the Ebbsfleet river. Northfleet became a town in 1874 with the Northfleet Urban District Council being established c. 1894. In 1974 it was merged with the adjacent Borough of Gravesend. The first council offices were off the Hill, but the council then moved to Northfleet House (now a nursing home for the elderly). Northfleet House was once the home of Mr. Sturges a local landowner. Northfleet was in the lathe of Aylesford and the hundred of Toltingtrough.

Romans lived in the area now known as Springhead, which they called Vagniacae. A Roman road, which forms the basis of the A2 Watling Street, divides the area.

In 1815 the first steamboat started plying between Gravesend, Kent, and London, an event which was to bring much prosperity to the area. The number of visitors steadily increased, and in the course of the next ten years several new and rival steam packets were started. The regular service given by the steam packets led entrepreneurs to establish amenities for the entertainment of visitors, one of which was Rosherville Gardens.

George Jones laid out the gardens in 1837 in one of the disused chalk pits, covering an area of 17 acres (69,000 m²). Their full title was the 'Kent Zoological and Botanical Gardens Institution'. They occupied an area in what was to become Rosherville New Town (see below).

Robert Hiscock, in his A History of Gravesend (Phillimore, 1976) describes them thus:

They were a place of surpassing beauty and a favourite resort of Londoners. Adorned with small Greek temples and statuary set in the cliffs, there were terraces, and archery lawn, Bijou theatre, and Baronial Hall for refreshments, and at one time a lake. At night the gardens were illuminated with thousands of coloured lights and there were fireworks displays and dancing. Famous bands such as the American Sousa were engaged during the season. Blondin, the trapeze artist, performed ... In 1857 as many as 20,000 visitors passed through the turnstiles in one week. By 1880 the gardens had reached the peak of their popularity ... in 1901 they were closed. During a brief revival 1903–1911, they were used in the making of early films.

A pier was built to carry these crowds ashore, and a railway station opened on the Gravesend West branch railway. It was one of the steamboats from Rosherville Gardens that was involved in a horrific accident in 1878. The Princess Alice passenger steamer, after leaving Rosherville pier, was in a collision with the collier Bywell Castle, from Woolwich. 640 people died from the collision, 240 being children. An inquest was held at Woolwich, but no conclusive reason was ever established as to the cause of the disaster at the Devils Elbow on the Thames. 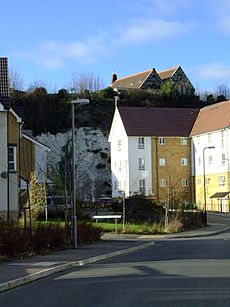 New builds in Rosherville in 2008

Joseph Rosher gave his name to a building scheme which began with the building of new houses in 1830. A prospectus states that ' this spot will ultimate become to Gravesend what St Leonards is to Hastings and Broadstairs to Margate'. That grandiose scheme did not materialise in quite that way, but the area of Northfleet still bears that name.

Northfleet during the Second World War

On Friday, 16 August 1941 150 German aircraft flew through the Kent skies, to deal the worst blow to civilian life the county had experienced to that point in the war. With the formation splitting into groups to be variously challenged from Manston, Kenley, Hornchurch, Biggin Hill and Hawkinge airfields, a group of Dorniers made it to Northfleet a little after midday. They dropped about 106 bombs ranging from 50–250 kilos over the town. The bombs killed 29 people, injured 27, and badly damaged two schools.

Northfleet has its own railway station, which opened in 1849 as part of the extension of the North Kent Line from Gravesend to London. All train services at the station are operated by Southeastern.

A design flaw that exists in Ebbsfleet International is its lack of pedestrian connections to Northfleet. Although the station's domestic passenger entrance is within a quarter of a mile of Northfleet's local station, the walking distance between the two is greater, hindering the advantage of living in Northfleet over nearby Gravesend, which is served by Southeastern's Javelin trains. 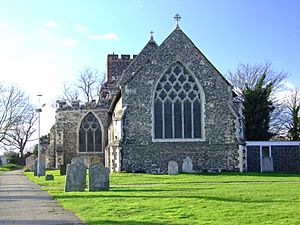 The ancient parish church of Northfleet (dating from the 14th century, but with work from earlier periods) is dedicated to St Botolph. Its tower was built in 1717, after the original had fallen. The church contains a 14th-century carved oak screen, which is thought to be the oldest in Kent. Rosherville St Mark's Church is now part of the Team ministry with St. Botolph's church. The other active church in Northfleet is All Saints, Perry Street which is Anglo Catholic. All Saints Perry Street is the largest Anglican parish in Gravesham Borough with a quarter of the Gravesham population living within its boundaries. 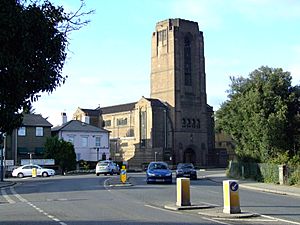 The Roman Catholic church, Our Lady Of The Assumption designed by Giles Gilbert Scott and with its tower foreshadowing his Liverpool Cathedral, is built entirely of brown brick. It was constructed in 1914 on the site of a former Tram Depot. During WW2, and the blitz, the German Air Force used the tower of the Church as a guide into London. The pilots used the tower as a reference point for direct access into London.

There a United Reformed Church (URC) on Dover Road in Northfleet. The Dover Road Chapel was opened on Wednesday 20 June 1850 as a Congregational Church. Northfleet URC is grouped with three other churches in the North Kent URC group. These are St Paul's URC, Singlewell Road, Gravesend; Hartley URC and Southfleet URC.

The Rotary Club of Northfleet was founded in 1954 and chartered as the Rotary Club of Northfleet – Club No 793 in R.I.B.I. District 1120. The club originally had members from many local industries (cement, engineering, paper making etc.), but as these industries declined along the river front, so membership changed. The club used to meet at lunchtime for many years, but this changed to evening meetings a few years ago. Northfleet Rotary Club, like most Rotary clubs also voted to accept women into Rotary membership, which is by invitation. The club's name was changed in 2005 to Northfleet with Ebbsfleet Rotary Club, to reflect the emerging growth of nearby Ebbsfleet area, with its developing infrastructure of Bluewater shopping complex, new High Speed Rail terminal at Ebbsfleet Station, and commercial and residential properties being developed as part of the wider development the Thames Gateway project. 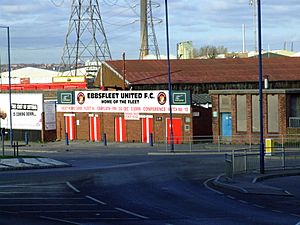 Although one would suppose Gravesend to be the main influence in the history of this club, as it was listed first when the towns' clubs merged, it was in fact Northfleet that was to be responsible for the early significant accomplishment of the association football club now known as Ebbsfleet United F.C. Ebbsfleet are currently in the National league under manager Garry Hill Star players are Danny Kedwell and Nathan Ashmore

Northfleet Football Academy was started in 2009 by local school Northfleet Technology College. Northfleet Football Academy was designed to recruit the elite of Graveshams football players and give them the best possible coaching to help them develop as players. It also offers its participants the opportunity to take a BTEC in Sports and one other additional subject like Science to help the players gain nationally recognised qualifications at key stage 4 whilst the players develop their playing skills. The academy is run by Northfleet Technology College teachers Brian Meaney (manager) and Lisa Donaldson (chairman) and also boasts the professional coaching of former Welsh international and current Ashford Town manager Steve Lovell. The Academy is based in Colyer Road, Northfleet.

Fleet Leisure F.C. are a Non-League football team who play in the Kent Invicta Football League. The team was originally based at Nelson Road, but currently groundshares with Rochester United F.C.

Gravesham Borough F.C. are a non-League football team who play in the Southern Counties East Football League. The team was originally based at Nelson Road, but currently groundshares with Chatham Town F.C.

Northfleet Urban Country Park sits on the eastern side of Northfleet, on Thames Way opposite the new police station, bounded by Springhead Road & Vale Road. The site is 10.5 hectares and provides a variety of wildlife habitats.

All content from Kiddle encyclopedia articles (including the article images and facts) can be freely used under Attribution-ShareAlike license, unless stated otherwise. Cite this article:
Northfleet Facts for Kids. Kiddle Encyclopedia.