Norwood, also known as Bainbridge, is a working-class residential neighborhood in the northwest Bronx, New York City. It is bound by Van Cortlandt Park and Woodlawn Cemetery to the north, the Bronx River to the east, and Mosholu Parkway to the southwest. The area is dominated topographically by what was once Valentine's Hill, the highest point being near the intersection of 210th Street and Bainbridge Avenue, where Gun Hill Road intersects, and around the Montefiore Medical Center, the largest landowner and employer of the neighborhood. Norwood's main commercial arteries are Gun Hill Road, Jerome Avenue, Webster Avenue, and Bainbridge Avenue.

The neighborhood is part of Bronx Community District 7 and is patrolled by the NYPD's 52nd Precinct. As of the 2000 United States Census, the seven census tracts that make up the neighborhood had a population of 40,748.

At the time of the Civil War, the area was Westchester County farmland on the border of West Farms and Yonkers. Chief property owners included the Valentine, Varian, and Bussing families. Woodlawn Cemetery was founded in 1863 to the north. Annexed to New York City in 1873 along with the rest of the West Bronx, the area's character shifted from rural to suburban by the turn of the 20th century. The neighborhood's streets in their present form were laid out in 1889 by Josiah Briggs between Middlebrook Parkway (renamed Mosholu Parkway) and Woodlawn Cemetery. Contemporary maps show that it was then considered part of Williamsbridge, with which it continues to share a post office. Williamsbridge Reservoir was opened in 1890, transforming the natural lake into an artery that served the New York City water supply system until no longer needed in 1934.

The area went through a series of names around the turn of the 20th century, including North Bedford Park, after the neighborhood to the south, and Brendan Hill, after St. Brendan the Navigator and the parish church, established in 1908, that bears his name. The name Brendan Hill was made official by the Board of Aldermen in 1910. Norwood, the name with greatest common currency, is first attributed in the form Norwood Heights—either in honor of Carlisle Norwood, a friend of Leonard Jerome, or simply a contraction of "North Woods", common to a number of places in the English-speaking world.

In the first half of the 20th century Norwood shared with the rest of the Bronx a population made up largely of European-origin Catholic, Protestant, and Jewish families affluent enough to leave Manhattan. These populations were joined by Puerto Ricans during the Great Depression and post World War II eras, and, post-1965, by other Latinos (especially Dominicans), Bangladeshis, Albanians, West Indians (especially Guyanese), West Africans (especially Ghanaians), and a new group of Irish immigrants.

In the 1970s through the 1990s the neighborhood was well known for its Irish population, having attracted a number of immigrants from Catholic areas of Northern Ireland who fled the Troubles. During this time that the neighborhood became known by two more names: Bainbridge, after the Bainbridge Avenue - East 204th Street commercial strip - included Irish restaurants, groceries, and pubs, and Little Belfast, after the city from which many immigrants came.

The area contributed much in Irish and Irish-American culture and politics during this time. The musical group Black 47, made up of Irish expatriates, first made their name touring the bar scene here. Their lyrics would go on to reflect the experiences of the Irish in the area, in such songs as "Funky Ceílí," "Her Dear Donegal," and "Rockin' the Bronx." Irish pubs in the area attracted press attention as centers of strong support for Irish republicanism, which supports ending the remaining British rule in Ireland. A few pubs hosted benefits for Noraid, the Northern Irish Aid Committee, accused by Unionists of gun running for the Irish Republican Army (IRA). At least one area bar, The Phoenix, was raided by law enforcement in 1994, with Irish authorities simultaneously raiding its owner's holiday home in Donegal. Thomas Maguire, the owner, and five others, were charged with smuggling thousands of bomb detonators to Ireland from Tucson via New York. A jury found the defendants not guilty on all counts.

A number of factors have contributed to the decline of the Irish population in Bainbridge. The most critical was the downturn in the US economy which forced many Irish immigrants to return to Ireland or to seek work in Germany (whose reunification process coincided with the American recession). A substantial portion of the Irish population were illegally in the country, and thus subject to INS investigation and deportation. The end of the Troubles period, with the signing of the Good Friday Agreement, encouraged some residents to return voluntarily to Ireland, particularly with the improvement of the northern economy. The growth of the economy of the Republic of Ireland - the so-called "Celtic Tiger" - persuaded some residents to move there. Others have continued to live in New York, moving to the Bronx neighborhoods of Riverdale and Woodlawn, or to nearby Yonkers. The same factors which encouraged return to Ireland have also discouraged further immigration to Bainbridge. 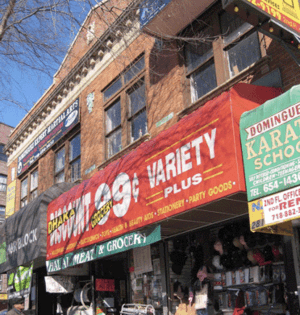 The entirety of Community District 7, which comprises Norwood and Bedford Park, had 148,163 inhabitants as of NYC Health's 2018 Community Health Profile, with an average life expectancy of 79.4 years. This is lower than the median life expectancy of 81.2 for all New York City neighborhoods. Most inhabitants are youth and middle-aged adults: 26% are between the ages of between 0–17, 31% between 25–44, and 23% between 45–64. The ratio of college-aged and elderly residents was lower, at 11% and 9% respectively. 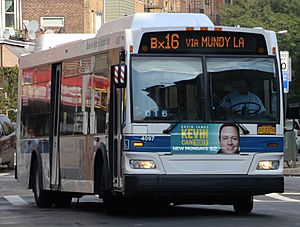 Nearby neighborhoods include Bedford Park, Williamsbridge, Olinville, Woodlawn, and Allerton. Norwood is sometimes referred to as a section of Williamsbridge, but given how different Norwood's adjoining area to the east is, it is difficult to understand how this notion ever came into being. Possible sources of such a misconception could be the shared zip code between Norwood and Williamsbridge (10467) or due to the "Williamsbridge Oval" in Norwood. 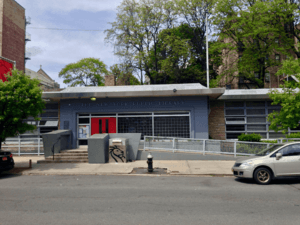 The New York Public Library (NYPL) operates the Mosholu branch at 285 East 205th Street. The branch opened in 1955 and contains two floors: a ground floor and a basement.

All content from Kiddle encyclopedia articles (including the article images and facts) can be freely used under Attribution-ShareAlike license, unless stated otherwise. Cite this article:
Norwood, Bronx Facts for Kids. Kiddle Encyclopedia.